Finding an ideal toy for young children and preschoolers might seem like an easy task at first, but there are, in fact, more criteria to be taken into consideration than might appear at first. It’s not a secret that educational toys open limitless possibilities for children. The earlier children are introduced to the concept of toys that not only entertain but also teach them and make them think, the bigger are the chances that they will happily embrace more serious and though-provoking hobbies as they get older. This is why it is important to understand how a child’s brain works and what it needs at every stage of its development.

Educational toys and stages of development

Toddlers, or children between the ages of 1 and 3, are starting to learn to do things by themselves. And is the best time for implementing educational elements into games. Kids of this age can follow simple instructions and are capable of completing simple tasks, such as stacking brinks on top of one another or painting. This is why toys for this age group should be tactile and multi-functional enough to keep their attention long enough to not let the little one get bored.

Children between the ages of 3 and 5, or preschoolers, are on the verge of entering a completely new stage of their lives. With school approaching, it is vitally important to get them ready and make sure they feel comfortable in this new and unknown environment. Educational toys are the best way to get them interested in the subjects they will very soon be facing, as well as help parents sneak-a-peek at who they kids might become in the future, as educational toys will help reveal their abilities and preferences.

Children between the ages of 6 and 7 are making their first steps in the different fields of science at school. Thus assistance and guidance from adults are crucial at this point, as not doing well in certain areas might forever avert the child from them. This is also the time when it is the hardest to keep a child away from gadgets, and this is why toys for this age not only should be selected in accordance with the child’s interests and hobbies, but should also be universal and multi-functional enough so that he or she would be able to come back to the toy over and over again, as well as play together with their friends and/ or family.

Wooden 3D puzzles for children as a perfect educational tool

With their origins dating back as early as the 1760s, jigsaw puzzles that were initially made of wood and were basically maps that had been cut into small pieces,  are a living example of an educational value that is not affected by their universal simplicity which is essential for all toys for young children and toddlers. We at UGears took the best from the original jigsaw puzzles, that made them withstand the test of time and make it to the 21st century alongside smartphones and the internet.

First of all, all UGears puzzles are made of 100%-natural plywood, which makes them eco-friendly as well as baby-friendly.  Secondly, we took the basic principle of jigsaw puzzles that makes joining puzzle pieces together effortless and not requiring any special tools, including glue. What we added to the equation is that all sets are 3D puzzles, extending the play space beyond the table and making them easy to carry around just like other toys. More importantly, wooden puzzles by UGears feature moving elements and mechanisms that are hands-on illustrations of key mechanic principles. These toys, once assembled, continue to be useful and bring joy.

Kids learning puzzles by UGears are suitable for several age groups of preschool children. All educational puzzles for kids by UGears are pre-cut and require little to no effort to get them out of their wooden frames. Each set comes with an assembly manual and is labeled with a difficulty level which depends on both the number of pieces in the set and estimated assembly time. Let’s take a look at the most popular sets within each category for preschool children.

As we mentioned earlier, children from 1 to 3 years old like touching and feeling different surfaces, and it is also the age when they discover drawing and painting for the first time. 3D Build and Color are educational puzzles for toddlers and younger children that feature numerous moving elements and that can be painted after assembly!

Each set in the 3D Build and Color series consists of 5 to 6 toys that are assembled individually and features an array of cuddly animals, means of transport, and popular toys. Educational puzzles for 5-year-olds and above feature more complex moving elements and simple gear mechanisms. With the approximate assembly time of 20 minutes, not counting the painting time, these sets typically feature not more than 100 parts and are a perfect tool for developing motor skills that are essential for balanced brain development at this age.

The UGears Airplane, Kitten, Steamboat, Sailboat, Locomotive set is perfect for toddlers that have just discovered the sensation of motion and are mesmerized by it. Featuring toys that range from 2 to 5 sets of wheels together with two boats that gently rock on waves, this 6-piece set is another accessible demonstration of key mechanical principles to toddlers. For example, the Locomotive features a driver’s cab with a motor that pulls a car, while the Sailboat boasts a moving steering wheel that allows it to gently rock on waves.

The UGears Whale, Bear Cub, Bouquet, Cockerel And Rocking Horse set is suitable for both boys and girls. The Bouquet’s flower heads scroll around, while the Bear Cub gently plucks the guitar strings with his paw, while the most sophisticated mechanism of the set allows the three blades of the helicopter’s propeller rotate around its axis.

The UGears Clock, Donkey, Merry-Go-Round, Biplane And Mill set would suit older children starting from the age of 5. It is a unisex set that will be appealing to both boys and girls. A toy Biplane is equipped with a  moving front double-bladed propeller, while the Dutch windmill has a moving wheel for drainage just like a real one, that is driven by the mill’s moving wings. The latter is an open model that allows toddlers to get acquainted with the gear system for the first time. A Merry-Go-Round demonstrates the principle of the roller bearing work as it rotates around its axis, moving tiny figurines of an elephant, a horse, and a bear in one soothing motion.

The UGears Car, Helicopter, Rocket, Motorcyclist, Knight set is rich in moving parts, starting from the Knight’s horse impatiently patting the ground with its hoof to an astronaut that can be watched through the Rocket’s porthole floating in space. In addition, a baby whale moves around with his caring mother by his side teaching him to swim.

Educational 3D puzzles for preschool and elementary school children normally feature over 100 parts and are market ‘Easy’ in terms of assembly difficulty level. These educational puzzles for preschoolers usually cover the topics of transport, board games, or tabletop accessories that will enable the young learners to facilitate their workspace.

The UGears Flower is a beautiful set for the little princess. It is an immaculately detailed treasure chest where a little girl can keep her jewelry, knick-knacks, and secrets. The Flower reveals the treasures that are hidden inside its petals once the ring mechanism at its base is turned. In the center of the model, there could be a figurine of choosing: either a graceful ballerina or the Tree of Luck for accommodating bracelets and larger jewelry.

Even though the UGears Combine Harvester looks complex at first, it is quite easy to assemble, which will certainly give the little engineer a sense of accomplishment and a taste for further construction- and mechanics-related discoveries. The Combine Harvester is powered by a rubber band engine, which is wound up like pull-back cars or by simply spinning a large back wheel. This is one of the many UGears models with open sides that allow the curious preschoolers to study the work of a gear mechanism in action. 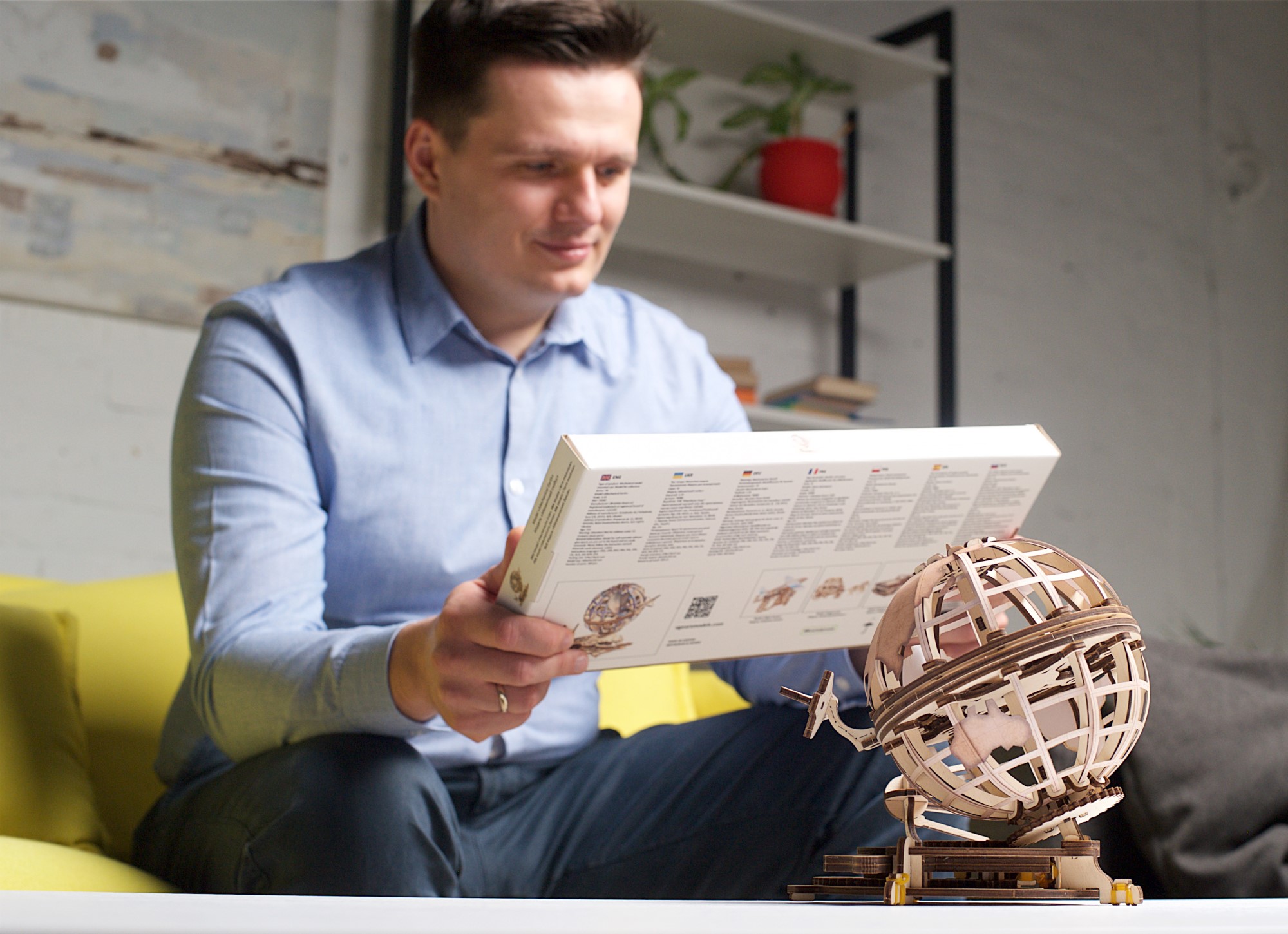