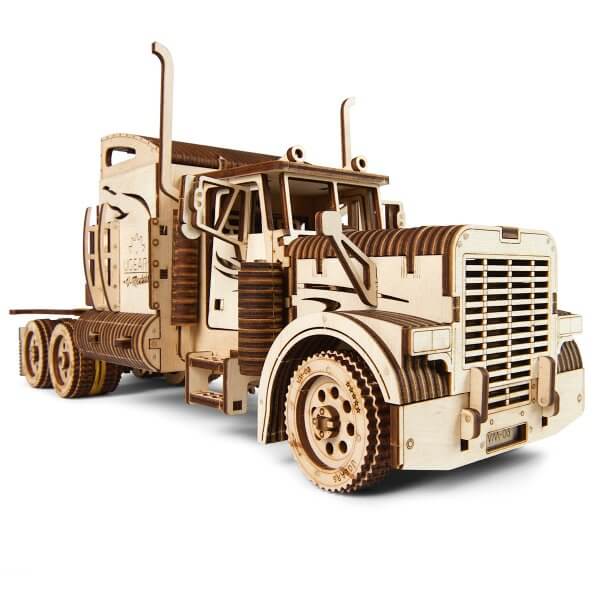 UGears introduces Heavy Boy Truck VM-03, the first of its kind in heavy machinery collection, tractor trailer. This mighty monumental specie of 18-wheel heavy-duty trucks is an exact replica of its real-life prototype. The detailed design features tractor trailer elements, such as two side exhaust pipes, two side mirrors, a fuel and air tanks. The heart of the Heavy Boy Truck VM-03 is a robust R6 engine, powered up by a rubber band motor. With its 3-mode realistic transmission system, a trailer connector system hook-up, and a cozy cabin, equipped with a sleeper, your mighty beast is ready to hit the open road and take on whatever challenges it’ll meet along the way.

The “Heavy Boy Truck VM-03” rubber band wind-up motor allows it to cover a distance of about 16 feet in single setting. The transmission element makes it possible for the Heavy Boy Truck to produce forward and reverse motion, and the front sprung wheels turn to set the direction. The cabin doors open and close, and the small ladder underneath the cabin allows for more convenient access in.

The “Heavy Boy Truck VM-03” wooden mechanical model kit comes with all the parts pre-cut and ready for the assembly. Detailed and easy to follow, illustrated assembly instruction come within each kit.

Overall Rating
5
(7 Reviews)
100% would recommend this product
Rating
5 Stars
7 Reviews
4 Stars
0 Reviews
3 Stars
0 Reviews
2 Stars
0 Reviews
1 Stars
0 Reviews
Overall Experience
Play Experience
3.5
Level of Difficulty
4.7
Value for Money
4.7
Please note that by submitting a helpfulness vote on a review your IP address is collected and stored by our trusted third party service provider for the sole purpose of preventing multiple entries from the same IP address. To see how to control your personal data, please see our Privacy policy.