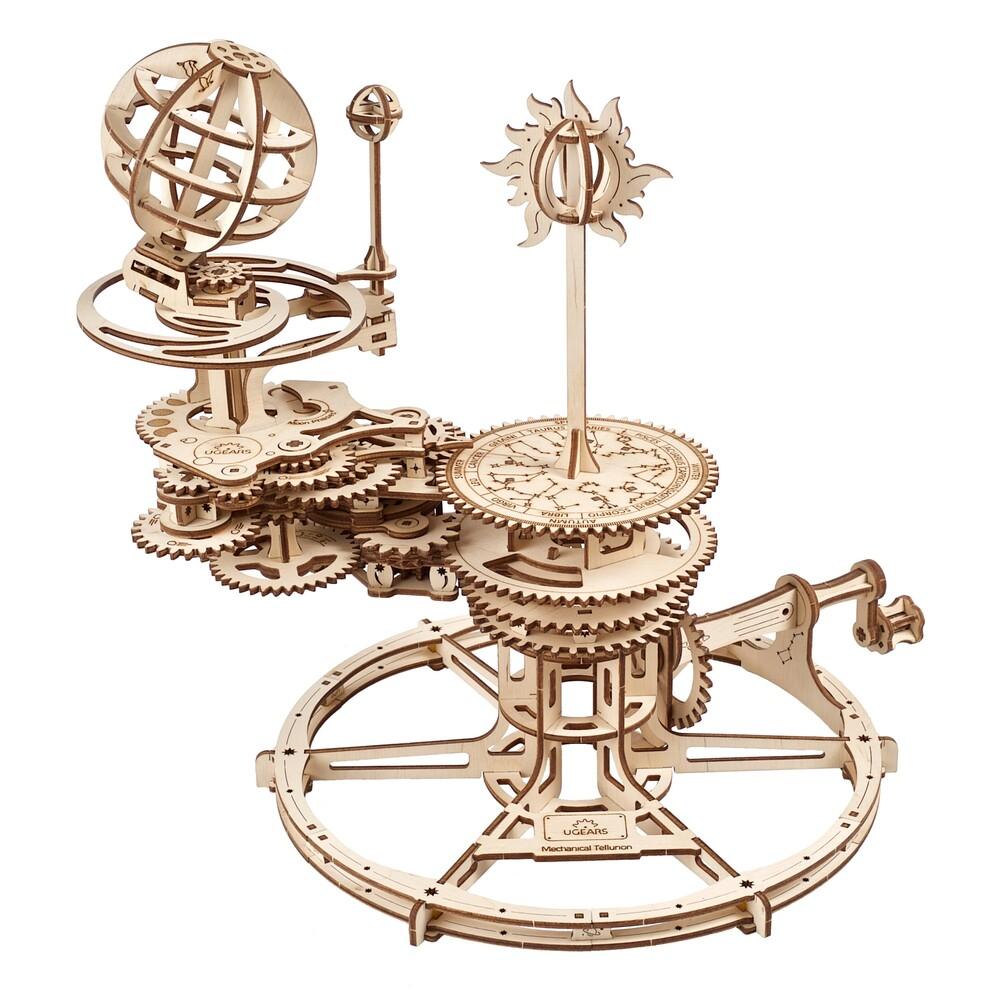 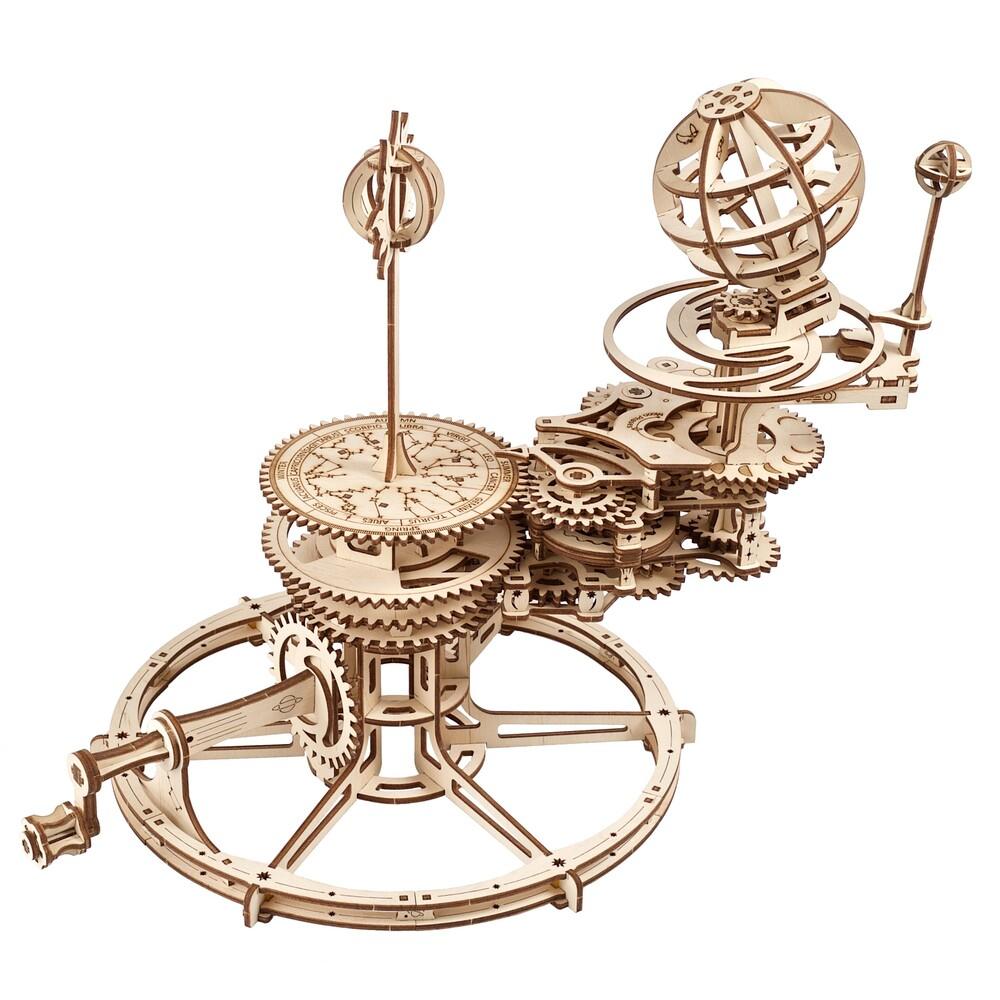 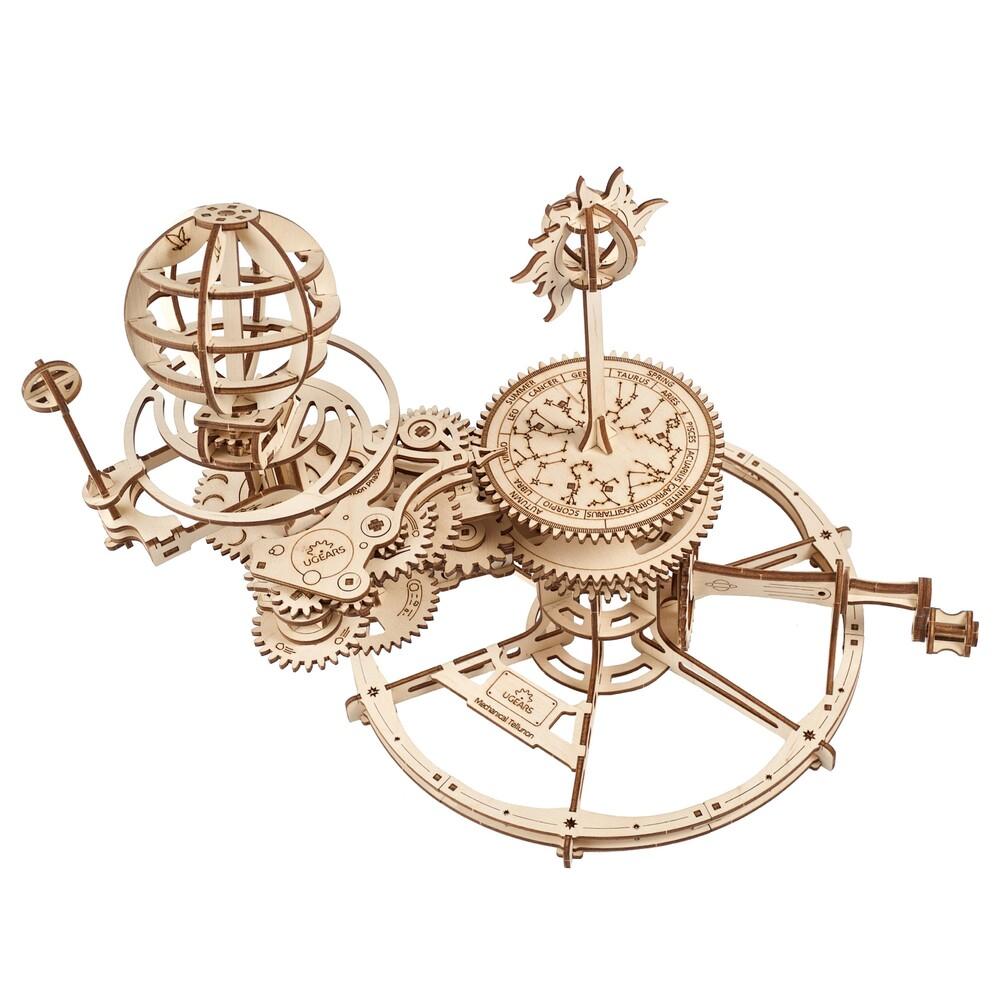 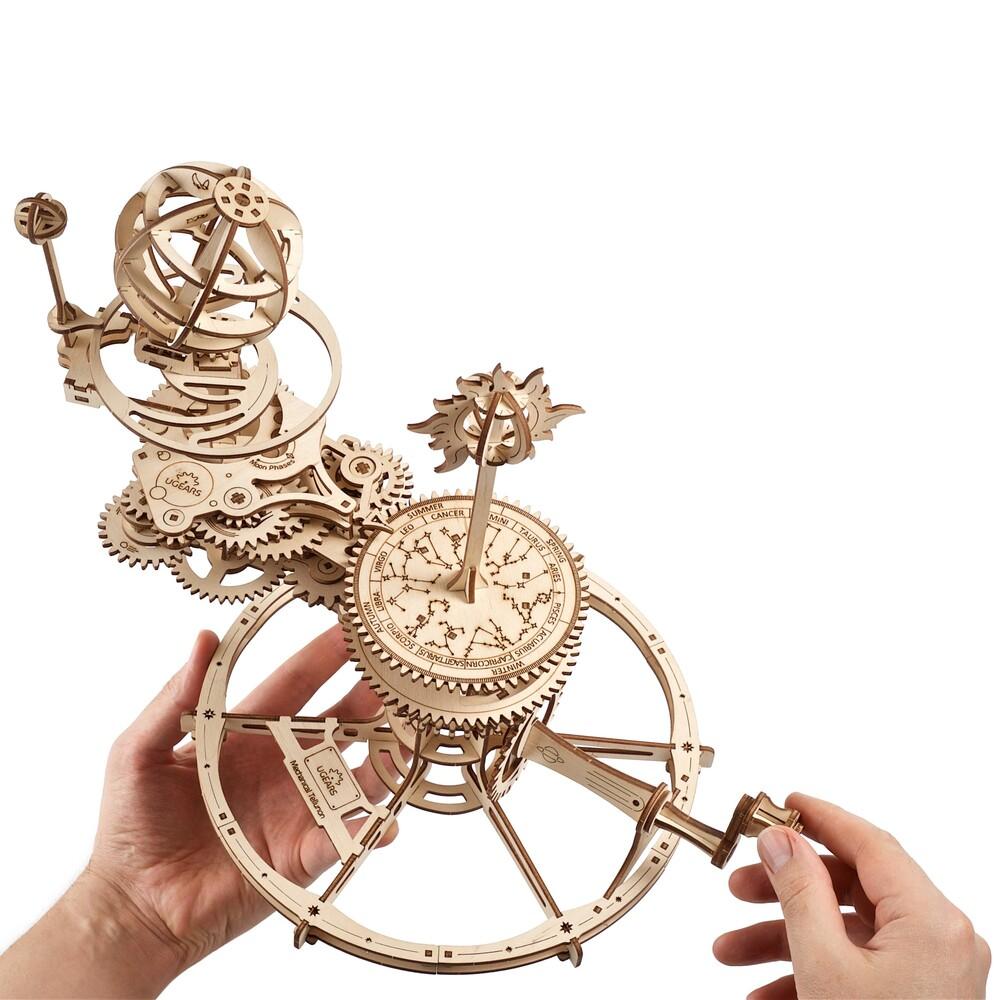 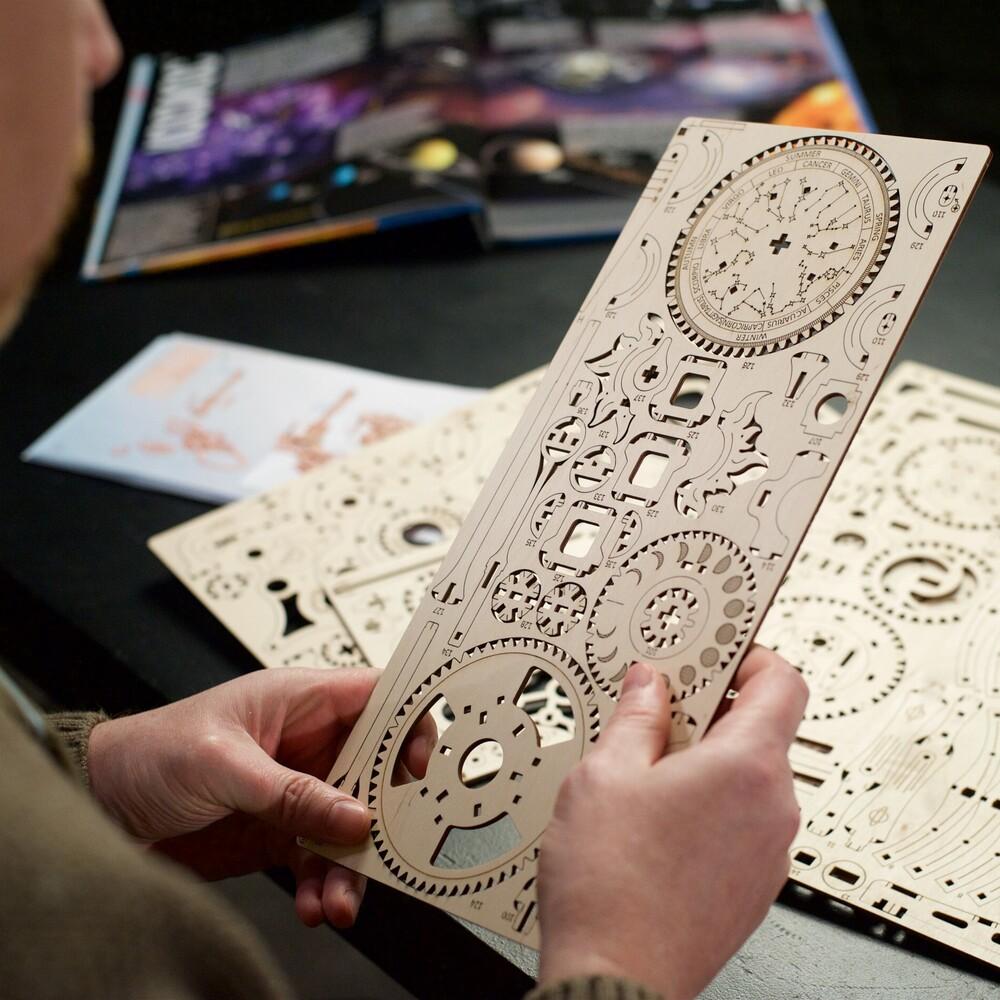 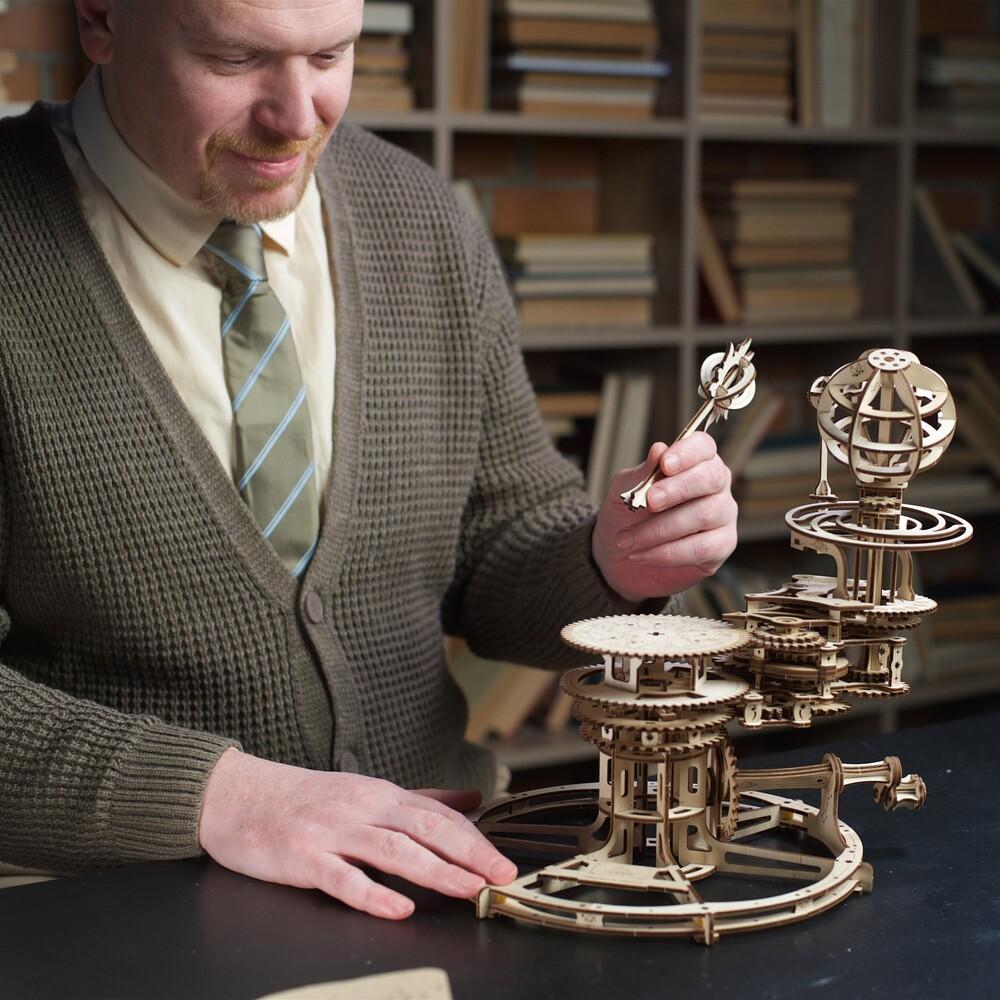 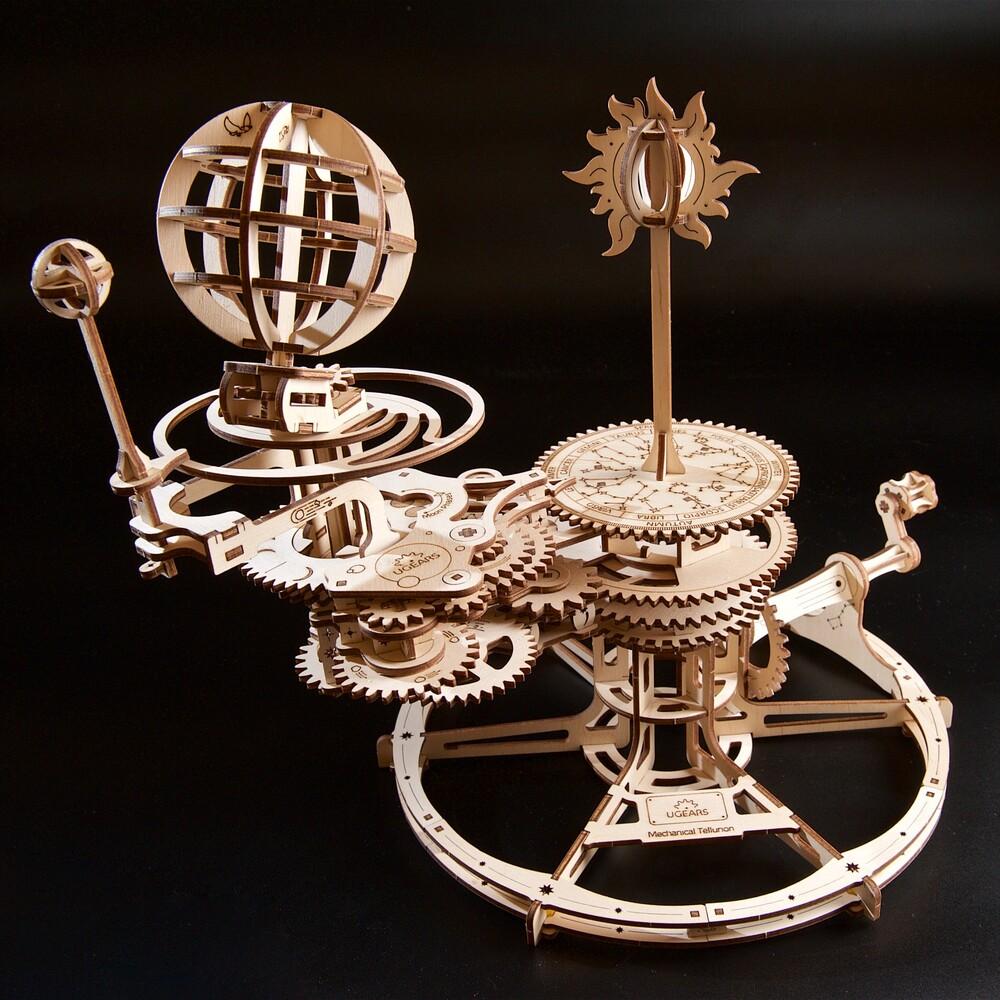 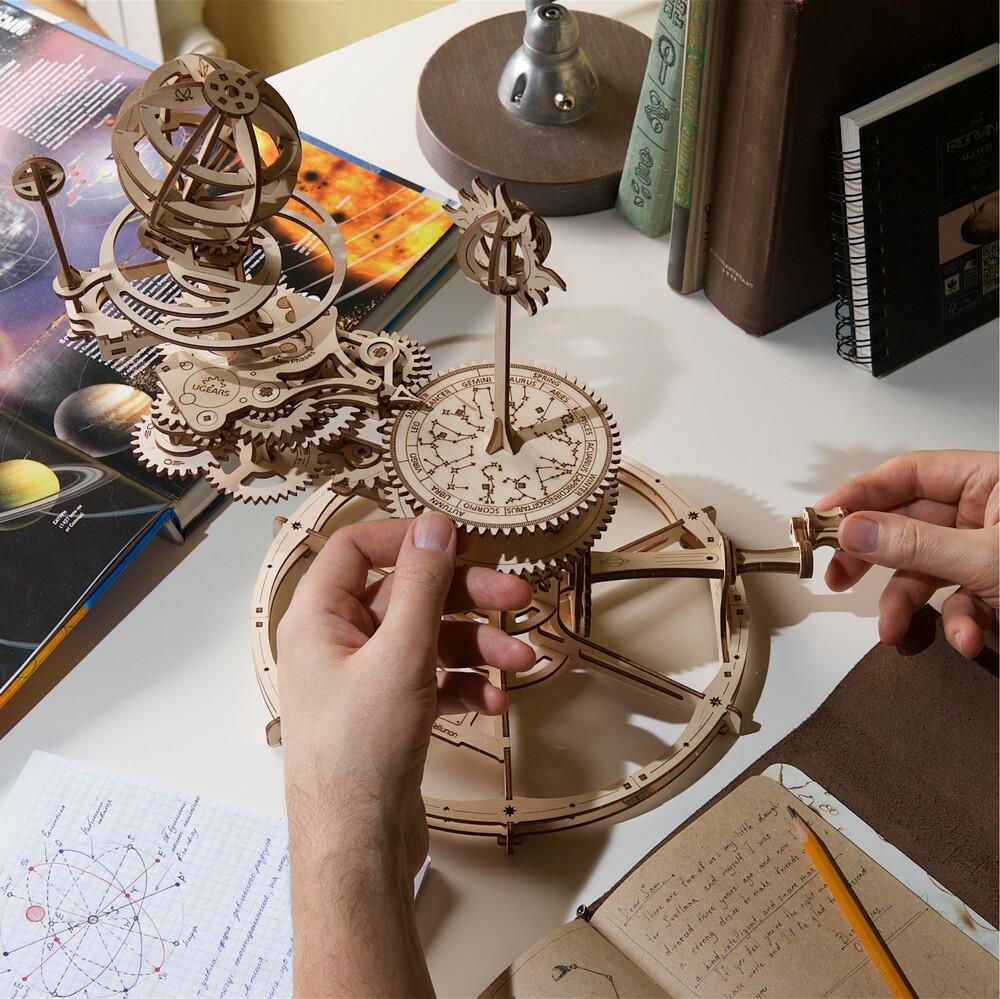 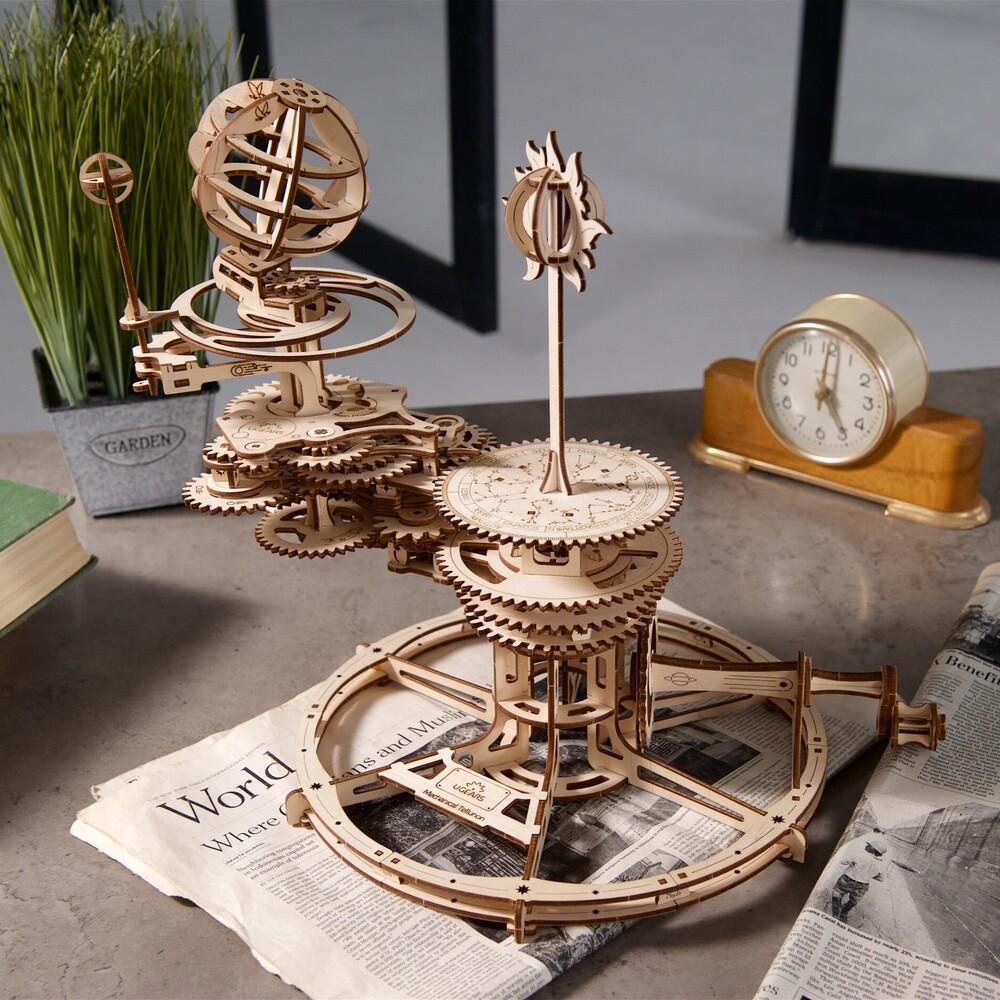 A model dealing with space has been on Ugears engineers’ minds for some time now. Add to this our fans’ constant requests for an orrery and you get the ‘Mechanical Tellurion’ – the astonishing result we are presenting to you now! This model will help you understand the motion of our Earth and the moon, as well as promote interest in the vastness of space around us!

The Mechanical Tellurion is a stunningly precise plywood embodiment of our part of the universe. A tellurion (also known as ‘tellurium’, ‘tellurian’ or ‘loxocosm’), is a wondrous machine depicting the space tango of the Sun, Earth and Moon. The changing of night and day, the moon phases, and the turning of the seasons are easy to comprehend looking at the 3D puzzle movements. A tellurion (derived from tellus, a Latin word for ‘earth’) is connected to the orrery, which shows the movements of the planets our the solar system, as well as their positions.

Although we can’t provide you with an answer to some philosophical queries like ‘Where is my place in this world?’ or ‘Where am I headed?’, this DIY puzzle will help you visualize the route you take as a dweller of Earth, as well as our connection with some other celestial bodies. The magical phenomena of night and day, moon phases, seasons changing and years passing become clearer with this Ugears mechanical model for adults and kids. Show the assembled Tellurion to your loved ones, and promote a better grasp of the workings of the universe, of the concept of space and time.

Turning the handle sets the carefully calibrated gear system in motion. A turn of the handle equals one rotation of our planet on its axis (equals one day). Watching the earth move around the sun, you can clearly see how sunrise and sunset occur, how day turns into night. The Tellurion depicts the moon phases, which depend on its position relative to the earth and sun. The moon trajectory changes when it falls and rises slightly. The earth’s way around the sun, combined with the precise 23.5-degree incline of the earth on its axis, shows the reason for seasonal changes (apart from the equatorial areas). The Tellurion depicts the changing of the seasons. It also shows the constellations under which you were born, thus explaining the concept of zodiac signs.

Manually adjust the Telluriaon to get a precise portrayal of the relative positions of the earth, moon and sun on the day of your choice. As you ‘tune’ the model, place the pointer to the middle of summer or winter on the ‘dial of seasons’. You can rotate the tilted-axis earth (use a gear under the moon phases) to place either hemisphere furthest from the sun in the freezing cold winter, or closest to the sun in blistering heat of summer. Turning the handle the correct number of days back or forward will set the present day. Consult a lunar calendar and place the moon to the right phase using the upper gear disk. You have now ‘set’ your Tellurion. As each day passes, turn the crank once to follow the earth’s movement around the sun, as well as the lunar cycle of the moon orbiting the earth.

With the help of Tellurion, you will discover that the full moon is seen when the moon is away from the sun, behind the earth. It occurs because the sun lights up the entire moon surface which we can see (the moon’s ‘bright side’). When the moon is between the sun and the earth, however, the sun only lights up the part of the moon which is hidden from our view (the ‘dark side’ of the moon). This phase is called the ‘new moon’, the time when we can’t see the moon in the night sky. Between these phases, the part of the moon visible to us changes constantly. The Ugears Tellurion 3D model will help you understand this any many more somewhat counterintuitive space-related concepts!

The Ugears engineers always strive for absolute perfection. The Mechanical Tellurion features a state-of-the-art gear system (first invented in 17th century by a Dutch mathematician Christiaan Huygens) allowing for the most precise approximations possible in a model of this sort. The gearing of the earth has a 365.256 day orbital period, while the gearing of the moon features an orbital period of 27.323, which is fairly accurate by any standards!

The Tellurion kit consists of 249 parts and has ‘Medium’ rating and an estimated 5-hour construction process. It will be loved by anyone with an interest in astronomy, space, watching the sky, or people who want to teach a kid the basic natural processes which determine our lives (day and night, seasons, the lunar cycle, and the construct of time). It is a wonderful DIY model or present for any mechanical model lover or keen astronomer. We are happy to finally give this extraordinary tellurion/orrery 3D model to all Ugears lovers on our beautiful spinning planet — and beyond!

Overall Rating
5
(1 Reviews)
100% would recommend this product
Rating
5 Stars
1 Reviews
4 Stars
0 Reviews
3 Stars
0 Reviews
2 Stars
0 Reviews
1 Stars
0 Reviews
Overall Experience
Play Experience
5
Level of Difficulty
2
Value for Money
5
Please note that by submitting a helpfulness vote on a review your IP address is collected and stored by our trusted third party service provider for the sole purpose of preventing multiple entries from the same IP address. To see how to control your personal data, please see our Privacy policy.