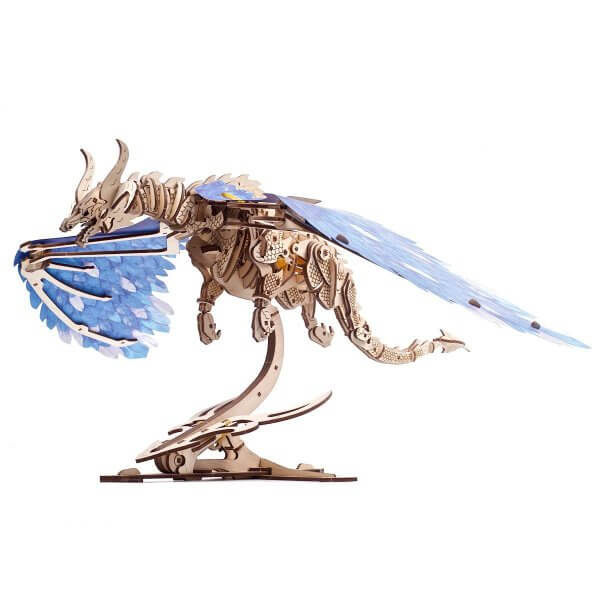 You step into the cave and the pungent smell of the ancient reptile fills your nostrils. Your senses are stretched to the limit as you grip the hilt of your weapon. You know that as soon as those ancient eyes open and pierce the oppressing darkness of the dragon’s lair, there will be no easy way out.

Hoar Dragon from The Soul of Hunter video game provided the inspiration for the Windstorm Dragon from Ugears. Our engineers and designers created this spectacular model to honor the ancient mythical beast, which is central to so many mysterious stories and fascinating legends.

You can place the Windstorm Dragon on a special support or hang it on a string. Awe-inspiring and undeniably gorgeous, with its open-style design, exposing its beating mechanical heart, marvelous scales and a spiky tail, it will look impressive in either position.

Use a winding key in the frontal part of its chest in order to put the creature in motion. Rotate the key clockwise while holding the dragon by its body. Pull the start lever and release the rubber-band motor, which will put all the Dragon’s paws and its whole body in motion. A pair of spectacular powerful wings deserve a closer look: the skeletal parts of are wooden, but the wing membrane is made from colorful feathery paper. Due to the soft and flexible membrane, the movements of the wings look extremely realistic and capture your imagination.

Like all Ugears models, the Dragon features ecological plywood and does not require glue or special tools for assembly. Simply open the box, get into the Dragon Guru mode and set off to solving this Windstorm Dragon puzzle from the bygone ages!

There are no reviews yet.