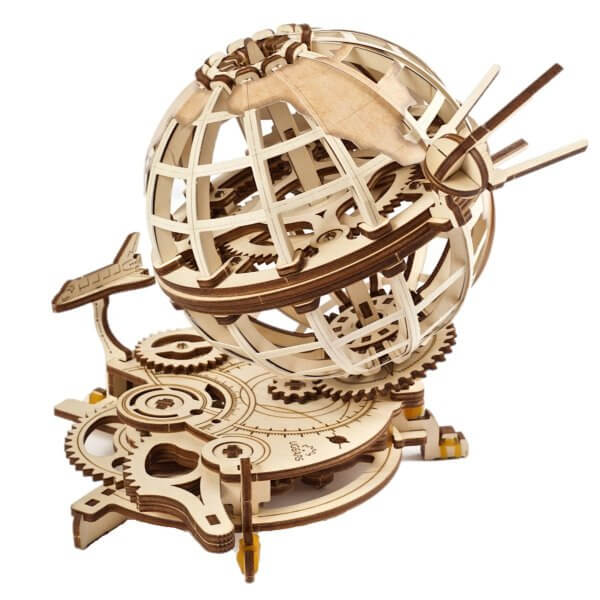 The new UGears Globus set provides a brand new look at an object we all know since school. Featuring an iconic UGears style, this model stands out among all the other UGears sets in the same category. This is more than a typical tabletop decoration for your office or study, but a unique element of décor that creates a sophisticated background to your daily work or study routine.

The model comes with two sets of decorative continents while the main part of the set consists of two blocks: the globe itself and its base. The base features elegantly carved gears and hides the set’s main secret, the rubber-band mechanism that allows the sphere to spin on its axis. Just like other UGears sets, this mechanism needs winding up. To set the mechanism in action, pull the lever at the base clock-wise.

Interesting additional mechanic features of the Globus include the pendulum reduction one that slows down the spin and two extra parts: the Space Shuttle and the Sputnik. Connected to the main module via a planetary gear, these two satellites rotate around the Globus at different speeds. It adds more life to the model as well as makes watching it even more exciting, as both the Space Shuttle and the Sputnik rotate around the Earth so fast that they manage to make two rounds before the fully-wound-up rotation mechanism stops.

In addition, the Globus is made from high-quality plywood, and just like all the other UGears puzzle sets, it does not require any additional tools or glue. An 11-language illustrated catalog that comes with it is there to make sure your experience is enjoyable to the max.

HOW TO MAKE UGears Globus

Overall Rating
5
(6 Reviews)
100% would recommend this product
Rating
5 Stars
6 Reviews
4 Stars
0 Reviews
3 Stars
0 Reviews
2 Stars
0 Reviews
1 Stars
0 Reviews
Overall Experience
Play Experience
4.8
Level of Difficulty
2.5
Value for Money
5
Please note that by submitting a helpfulness vote on a review your IP address is collected and stored by our trusted third party service provider for the sole purpose of preventing multiple entries from the same IP address. To see how to control your personal data, please see our Privacy policy.