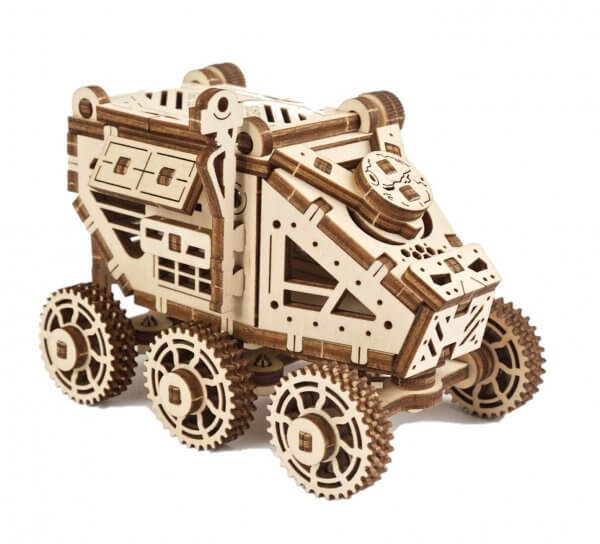 In times when Mars exploration does not seem too far ahead in the future for humanity anymore and is viewed more like something that is just around the corner, UGears is inviting you to join in on the excitement with this set.

The UGears Mars Buggy is an innovative model from UGears for many reasons. First of all, it is a very precise replica of a six-wheel space rover we are so used to seeing not only in sci-fi movies but also in the exciting articles about recent discoveries. Secondly, this tiny but brave space terrain explorer features a fully-operational mechanism that allows it to make its journey around your desk with the same agility as its real-life prototypes do on the surface of Mars.

All the six wheels of the Mars Buggy and inter-connected which provides steady and ultra-realistic movement. That’s right, this tiny space rover not only moves just like the real one but also can climb over small obstacles! Another utilitarian element of this set is the cargo compartment on the roof that allows the Buggy to carry and deliver small items such as pencil sharpeners or erasers.

UGears stayed true to the high level of detail that their 3d puzzles sets are well-known for with the Mars Buggy as well. The model features a camera on the side to record videos of the Mars surface, the ladder on the rear end, as well as solar panels. Another detail that is worth mentioning is a tiny image of Mars on the front.

The Mars Buggy is made from 100% natural high-grade plywood, like all the other UGears sets and does not require the use of any special tools, including glue. The beautifully-illustrated assembly manual in 11 languages will guide you through the assembly process and make it as enjoyable as possible.

HOW TO MAKE UGears Mars Buggy

Overall Rating
5
(3 Reviews)
100% would recommend this product
Rating
5 Stars
3 Reviews
4 Stars
0 Reviews
3 Stars
0 Reviews
2 Stars
0 Reviews
1 Stars
0 Reviews
Overall Experience
Play Experience
5
Level of Difficulty
2
Value for Money
5
Please note that by submitting a helpfulness vote on a review your IP address is collected and stored by our trusted third party service provider for the sole purpose of preventing multiple entries from the same IP address. To see how to control your personal data, please see our Privacy policy.