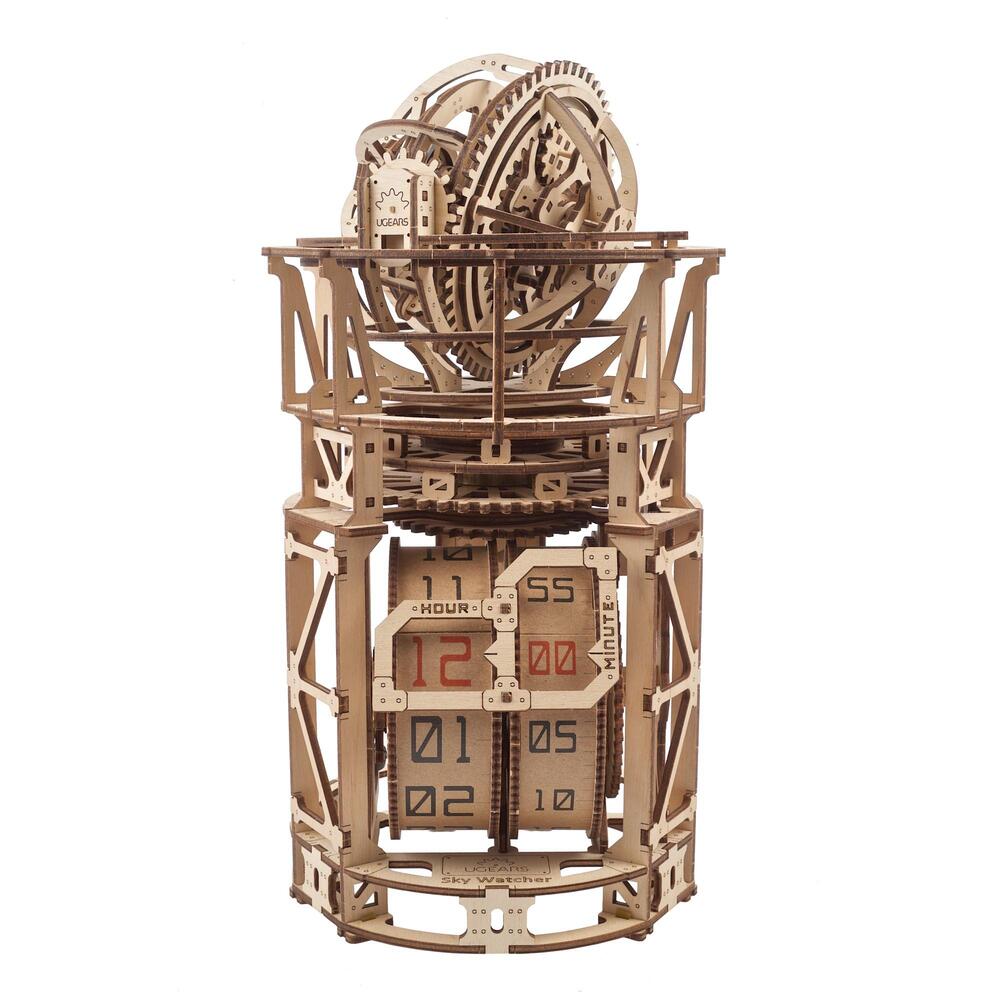 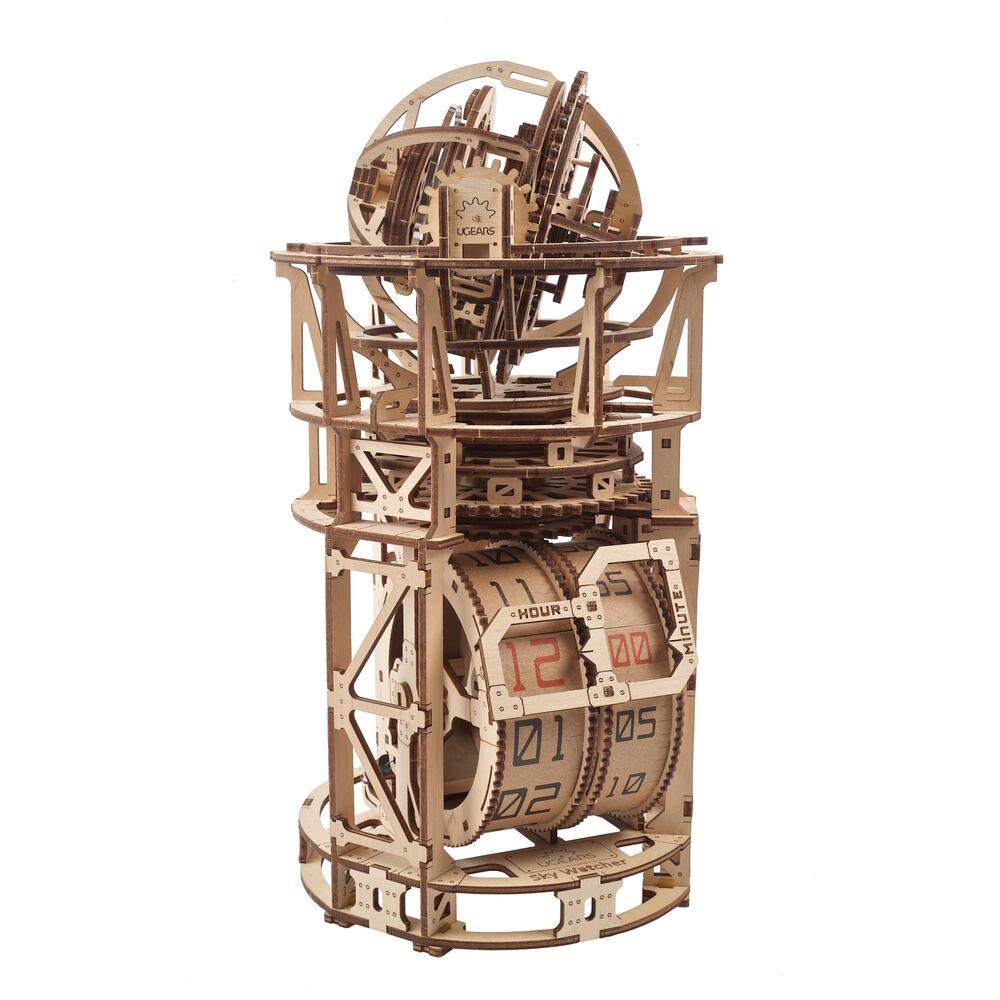 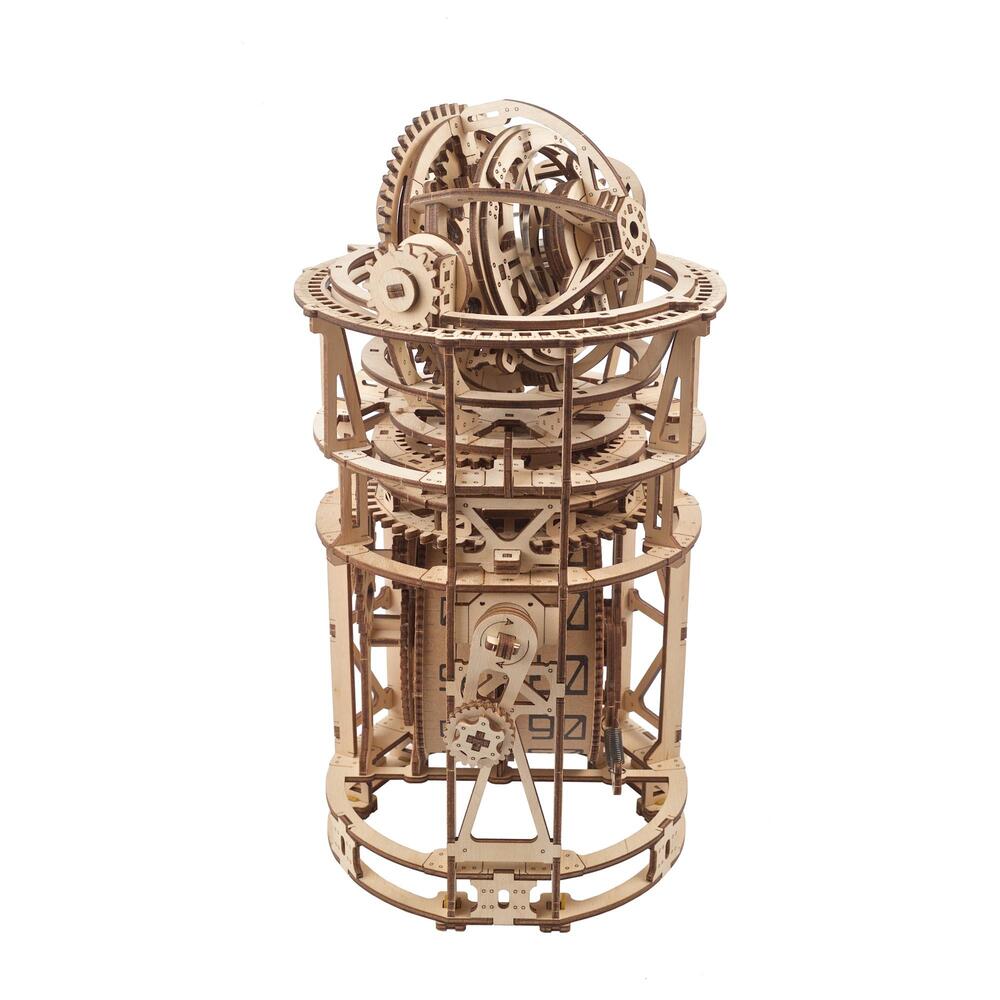 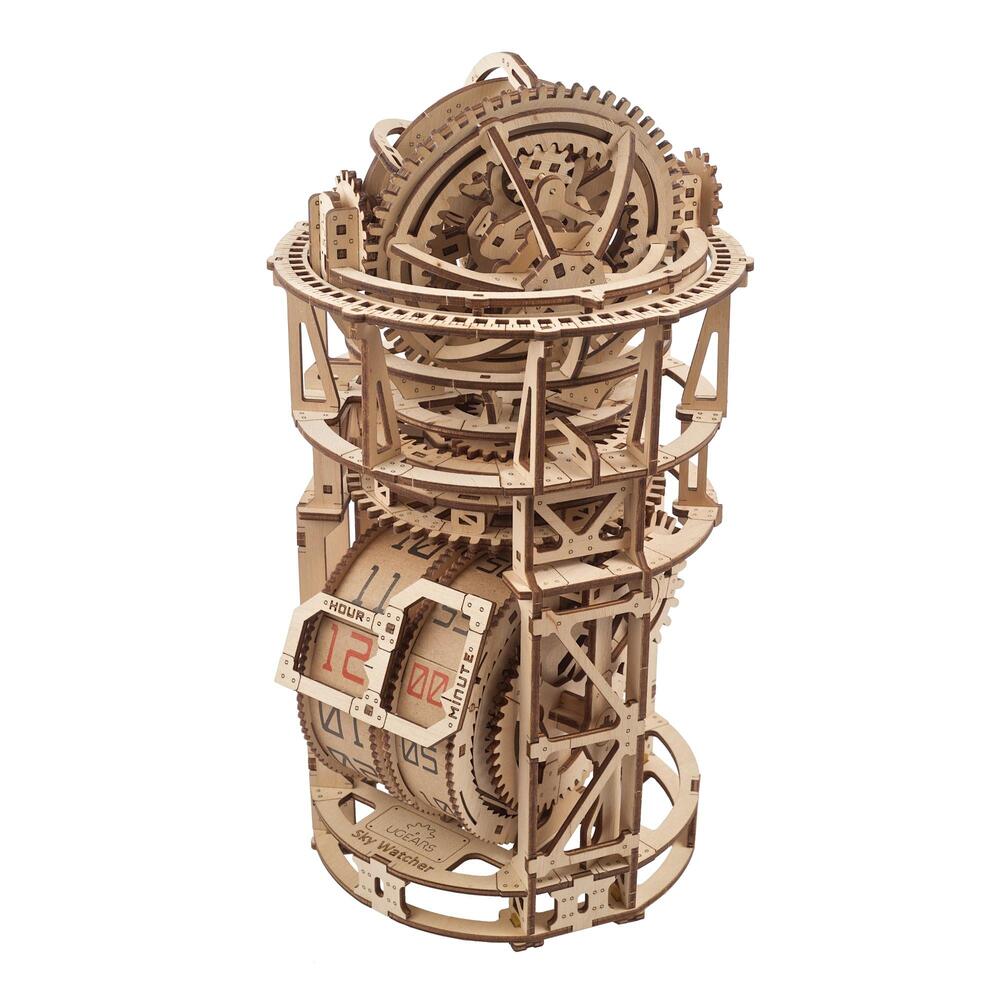 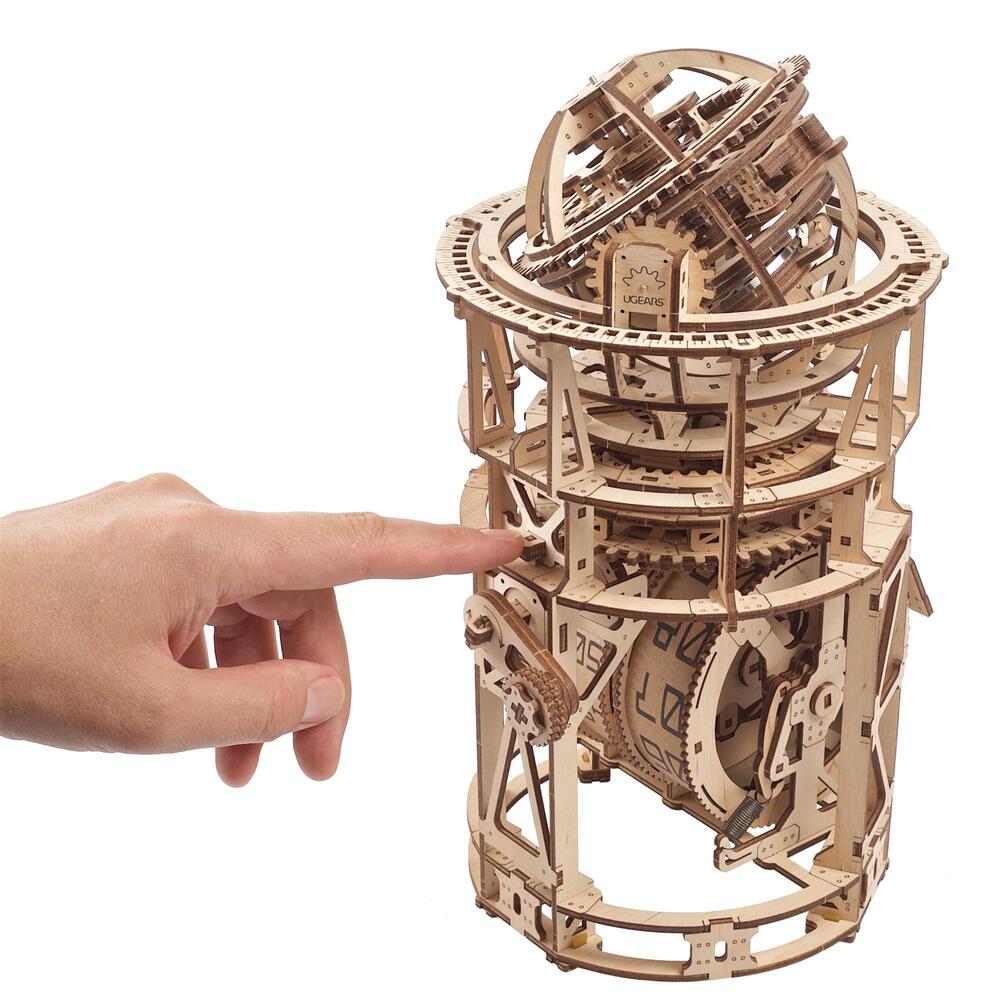 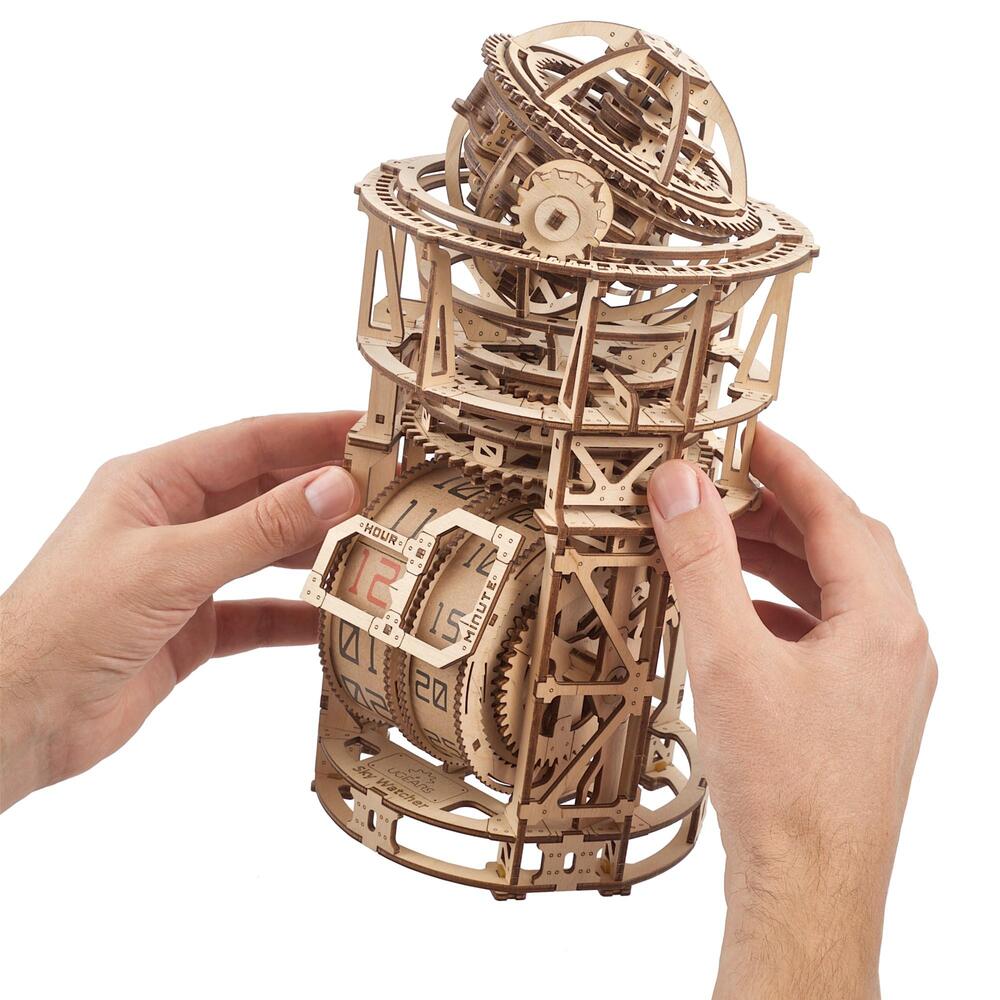 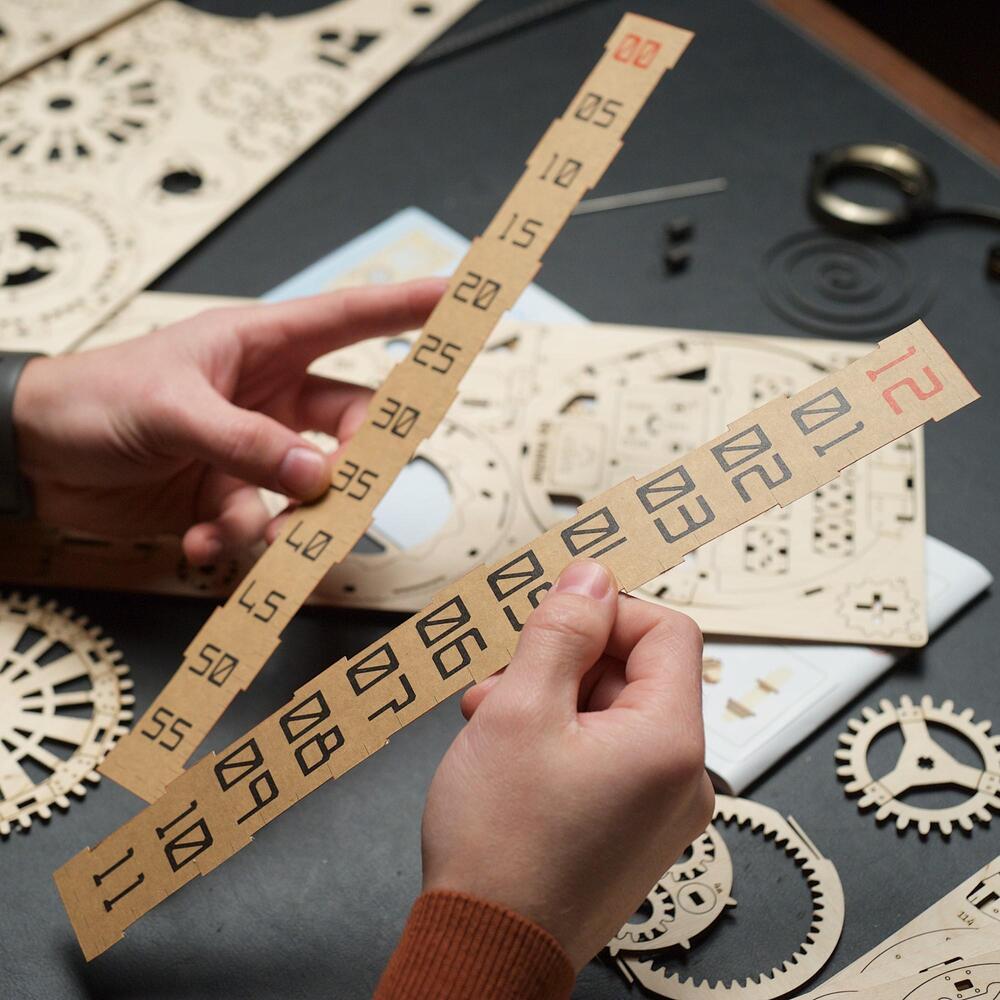 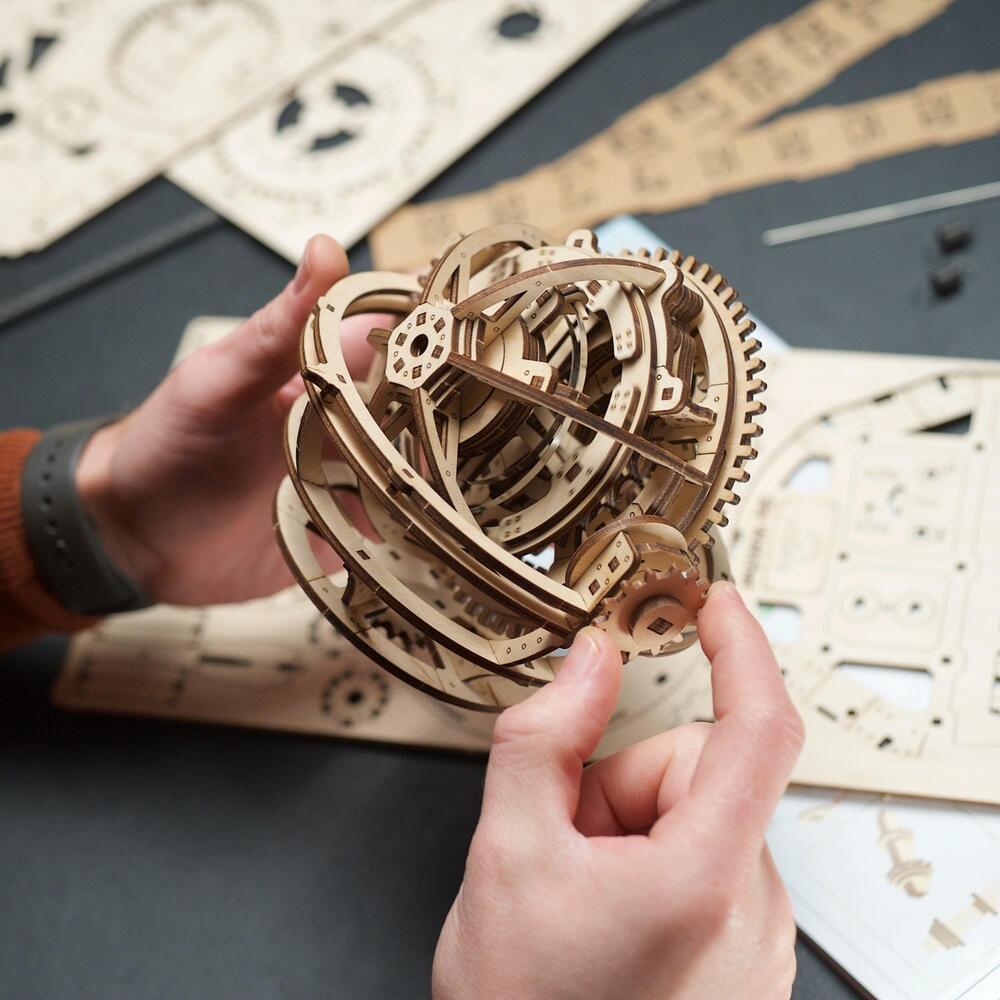 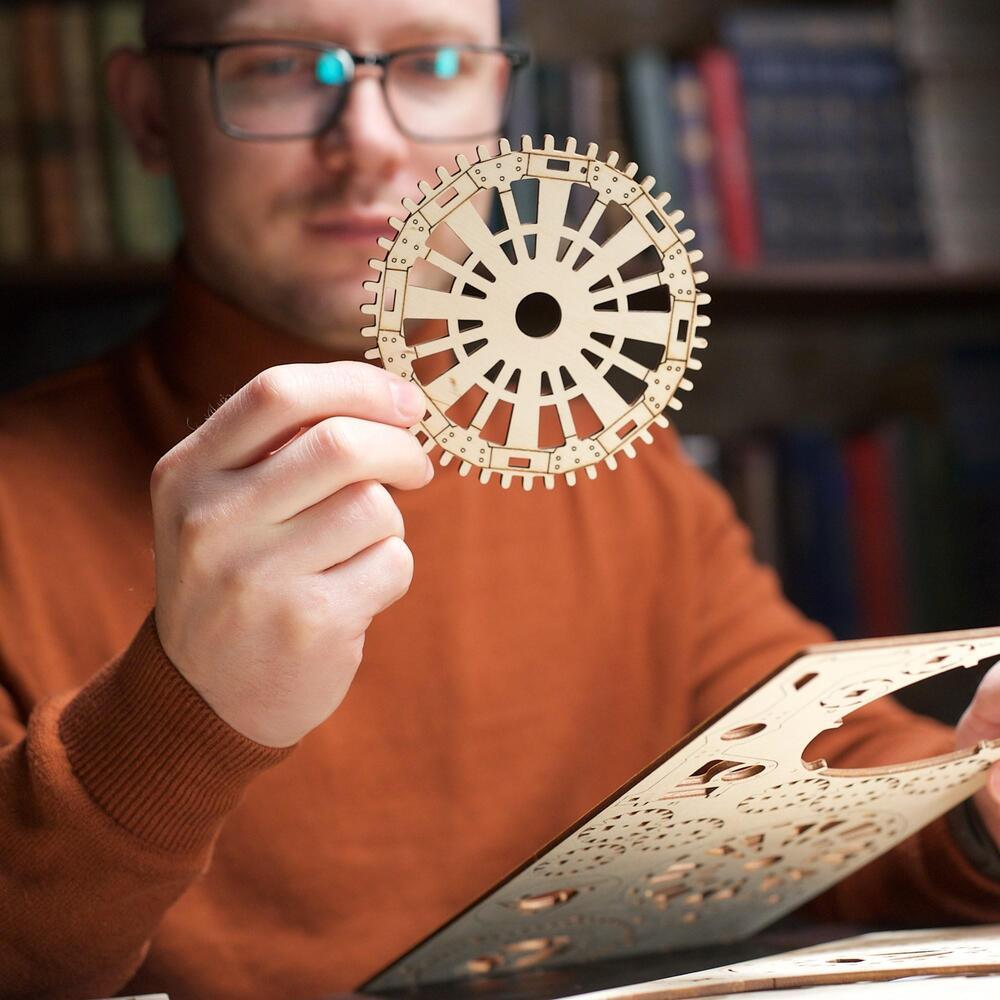 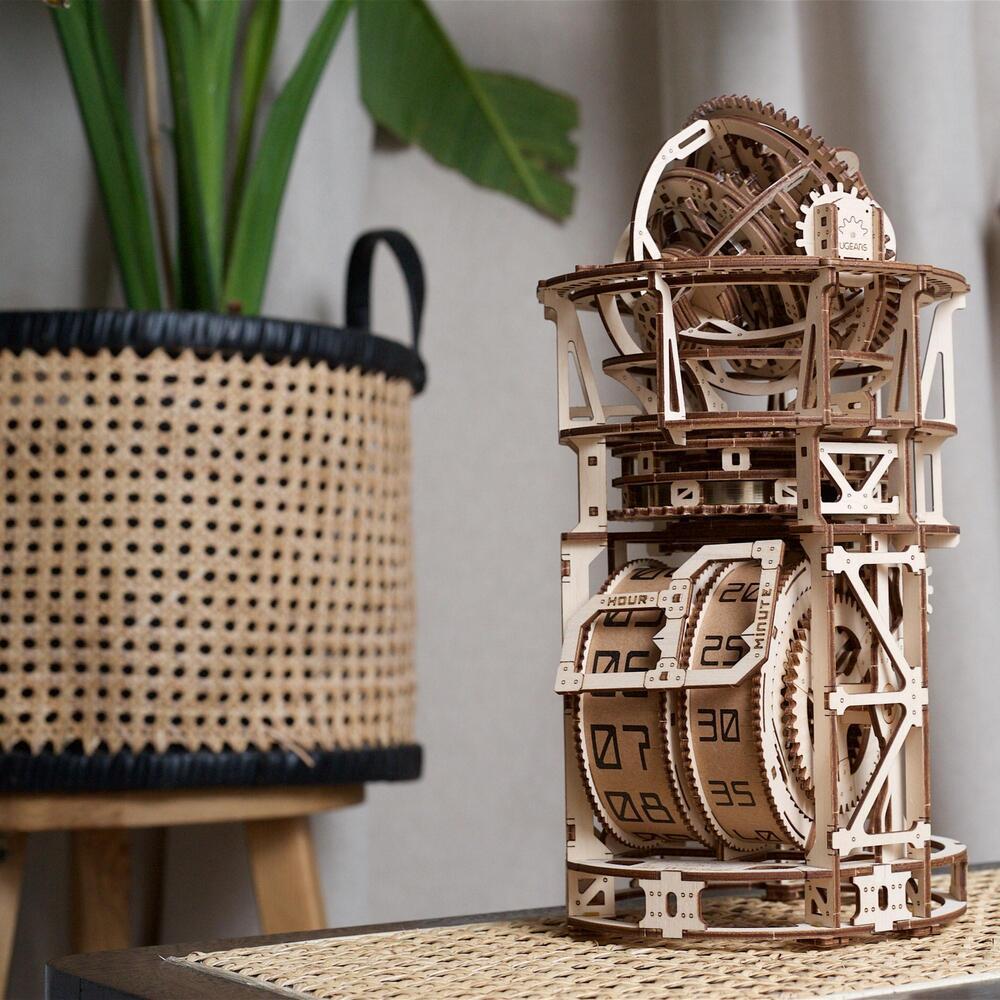 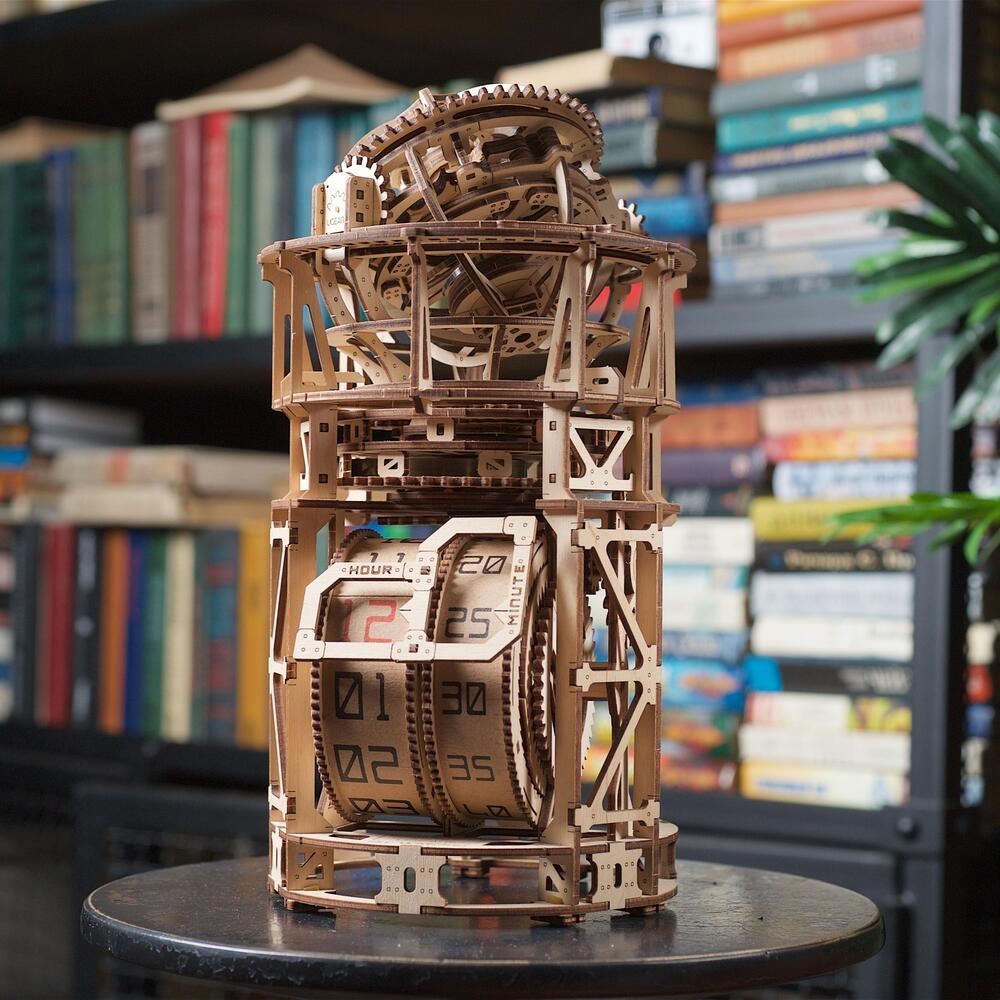 The theory of Clockwork Universe states that the whole world operates on the laws of mechanics. These principles – clear, pure, precise – are the foundation of the universe, as we know it. Such a theory greatly appeals to mechanical model lovers like ourselves, so we are proud to present yet another embodiment of our passion : the ‘Sky Watcher Tourbillon Table Clock’ !

Over the years, we’ve had numerous requests for creating a working wooden clock. Our Aero Clock, which is mounted on the wall and powered by gravity, is now being joined by this newest arrival, which uses the power of the spring to operate. Despite the challenges involved (gearing, friction, torsion, tooth strength), our engineers delivered a superior DIY model, which is now yours for the taking! Now it is your turn to assemble your own state-of-the-art clock !

The tourbillon – which is a central and eye-catching element of this model – is sometimes used to minimize the effects of gravity. In other models – including ours – it mostly serves as a decoration, elaborate and eye-pleasing! The Sky Watcher Tourbillon is positioned on the top of the model and resembles a huge telescope, scanning the night sky for any unsolved mysteries out there !

Abraham-Louis Breguet constructed the prototype of the tourbillon in 1795. He was also able to make the mechanism much smaller, fitting it into a watch, which could be carried around in a pocket. Alfred Helwig introduced the ‘flying tourbillon’ in 1920. His mechanism was mounted on one side, which meant it was easier to see its mechanical beauty. These days there are multiple variations of varying complexity, but the possibility to assemble one with your own hands must be exciting! Like in all Ugears models, no glue or special tools are required – just pre-cut wooden pieces and a detailed color manual to guide you !

This wind-up clock mechanism is rotated on three axes : vertical, horizontal and relative to the central axis of the inner sphere. Potential energy, which is accumulated in a flat spring, is then gradually released, making the clock tick for up to 3 hours at a time. To highlight the originality of the model, the time is shown on minute and hour reels, instead of a conventional hand mechanism. The smooth movement of the minute reel is complemented by a percussive mechanism of the hour reel.

An excellent addition to other exciting DIY model kits and 3D puzzles of all shapes, this clock requires patience and skill, so it would suit more experienced model enthusiasts, unafraid of an exciting challenge. It is a complex mechanism, requiring lubrication and precise assembly. The balance wheel lest you adjust the speed of the clock. Turn the minute and hour reels (in that order) to set the current time. The 11-language manual will be your unfailing map into the wonderous world of watch-making.

The ‘Sky Watcher’ is a perfect DIY present, which doesn’t take much space when fully assembled. It will be a great addition to your bookshelf or desk, reminding you of the happy hours spend putting this absolutely mind-boggling clock to life!

There are no reviews yet.