The key role of toys since they first appeared in approximately 2600 BC was to educate children and prepare them for life as adults. Toys have come a long way since then, but now they are for the very first time faced with a real threat that could not only affect their basic characteristics, as toys would have to adapt in order to compete with the powerful rival’s appeal, but also could greatly affect their popularity and their leading positions as children’s all-time favorites.

Smartphones and computers are starting to take up more and more space within kids’ leisure time. And unfortunately for toys, this is starting to look more and more like a one-sided battle. But what can they do to at least balance out the forces? The solution, of course, involves their parents’ guidance. Educational toys have the potential to grab and hold kids’ attention for a longer time than regular toys while keeping their mind busy is the best way to improve their problem-solving and cognitive skills. It is their parents’ duty, however, to encourage them and to guide them in that direction. But the reward for that would be better grades at school, positive self-esteem, more employment opportunities and higher chances to succeed in the future.

You might have heard the term ‘STEM’ or ‘STEM toys’ before. Let’s take a closer look at the benefits of STEM toys. ‘STEM’ stands for ‘Science, Technology, Engineering, and Mathematics’. School curriculum that is based on STEM is the one that is focused on teaching the basic principles of STEM-related subjects, which as science, technology, engineering, and mathematics. The key to teaching these disciplines is a hands-on approach, which is responsible for the development of a different set of skills when compared to the human sciences. Referred to in short as ‘learning by doing’ this method allows students to directly observe and understand what is happening.  It is often hard to properly understand something you have never directly seen or experienced. This is particularly useful for teaching children the aforementioned subjects, as they are surrounded by technology and might have been intrigued and were interested in finding out how this all actually works.

Furthermore, the hands-on method encourages children to do things on their own, which will help them with learning independently later on in life. With every experiment that they successfully conducted themselves, children will gain a sense of self-accomplishment which is so important in the young age and has a tremendous influence on a person’s life as a whole.

STEM toys are the best way to provide children with this unique learning opportunity and are a great chance to instill in them a love of science forever. There are a variety of different Stem Toys focusing on core disciplines in coding, engineering, chemistry, mechanical toys and more. Children that see that learning can be closely tied with fun will help toys survive the battle with technology and let them stay with us for generations to come.

Puzzles have been many times proven to contribute to the development of logical and mathematical skills. Like many other educational toys, they also give us that valuable sense of achievement. First appearing in the 1760s puzzles are still around which proves that they are a universal entertainment tool. But what do puzzles that we all know and love can offer children in the 21st century?

Traditional puzzles are associated with quiet evenings at home surrounded by one’s nearest and dearest all working on a 1000-piece painting of a Victorian cottage. Of course, jigsaw puzzles, with their rich history are the first thing that comes to mind when we visualize the word ‘puzzle’. Unfortunately, traditional jigsaw puzzles don’t stand a chance against technology. This is why the UGears team has come up with a perfect solution that turns jigsaw puzzles into IQ builder STEM learning toys. We have taken the best from the two worlds: the simplicity and the use of eco-friendly materials from jigsaw puzzles and the focus on science and technology from STEM toys.

Wooden 3D puzzle sets by UGears are an ideal candidate to become your child’s favorite STEM learning toy. All sets are made of 100% natural high-grade plywood and do not require any special tools at any stage of assembly. Each part is joined with another much like jigsaw puzzle parts and doesn’t need glue. All parts of puzzle sets come pre-cut from their wooden frames and can be easily taken out. Each part is very pleasant to the touch and has a unique wooden aroma that makes UGears STEM puzzle sets extremely enjoyable to work with.

Furthermore, each puzzle set features one or multiple moving parts that are based on a basic principle of mechanics. As all UGears sets are split into three groups by difficulty level (from ‘Easy’ to ‘Hard’), they are suitable for children of all ages, making physics easily accessible and understandable for all.

STEM building toys are a unique category as they can be easily adapted and for children of any age, from toddlers to high school children. In addition, these toys will be growing together with the child as they all have a unique design with elegant shapes and whimsical steampunk-style exterior elements that make them stand out among other toys and with time could make up a beautiful and one-of-a-kind collection.

STEM toys for toddlers and pre-schoolers

The UGears 3D Build and Color series are specially-designed STEM toys for toddlers and pre-schoolers that not only feature moving parts and simple mechanisms but can also be painted after assembly! This is the ages when children start doing everything themselves and start taking interest in painting. This is also the time when the development of their fine motor skills is vitally important. As various studies have shown, its direct impact on their overall brain development. This way with these toys the fun extends way beyond the building process that takes approximately up to 20 minutes. Each wooden puzzle set consists of 5 toys united by one theme, such as, for example, transport (the UGears Car, Helicopter, Rocket, Motorcyclist, and Knight set), popular toys (the UGears Whale, Bear Cub, Bouquet Cockerel, and Rocking Horse and the UGears Clock, Donkey, Merry-Go-Round, Biplane, and Mill sets). The mechanical parts of each toy vary from a moving bear paw that is strumming on the guitar strings to the gear system that set the drainage wheel with blades in motion for a tiny copy of a Dutch windmill.

Elementary school children are starting to develop specific hobbies and preferences, which makes it easier for their parents and close relatives to look for presents for them. The Ugears Flight Starter or the UGears Tractor sets are perfect for children interested in transport, and feature rubber-band mechanisms that launch light paper planes in the air and send a tractor off with a speed of 2 inches per second respectively. Other sets include a fully-functioning but peaceful UGears Wolf-01 Handgun that shoots rubber bands and features a secret storage for ammunition and a safe lock just like its real-life prototype, or the beautiful UGears Flower set that is, in fact, a treasure box for jewelry that opens up its elegantly ornamented petals to reveal a little figurine inside.

Middle schoolers are harder to impress, this is why one of the widest varieties of UGears wooden STEM toys are available for this age group. The UGears Tugboat or the UGears Bike VM-02 are a perfect treat for transport enthusiasts. Each set features a rubber-band motor that sets it in motion, allowing the child to put himself in the shoes of an engineer. The UGears Monowheel is a universal set that would please both a girl and a boy, as it takes off powered by a wind-up rubber-band motor and can travel for up to 13 feet.

High school children are already familiar with Physics and would be delighted to see its principles at work first-hand with the help of meticulously detailed wooden STEM toys by UGears. Boys would definitely spend joy-filled hours assembling the UGears V-Express Steam Train With Tender with an open exterior revealing the fascinating work of its gears, while a single wind of the self-propelled produces enough power for the Train to run up to 13 feet. Gils would be thrilled to store their jewelry, secrets, and knick-knacks in a stunningly ornamented UGears Treasure Box with a smart secret of hiding the key that set the box cover mechanism in motion and smoothly moves the cover to the side, while the gears on the side of the box are moving in sync.

🤠 Fathers are important in every kid’s life.

🤩 Today we are happy to introduce one of our be 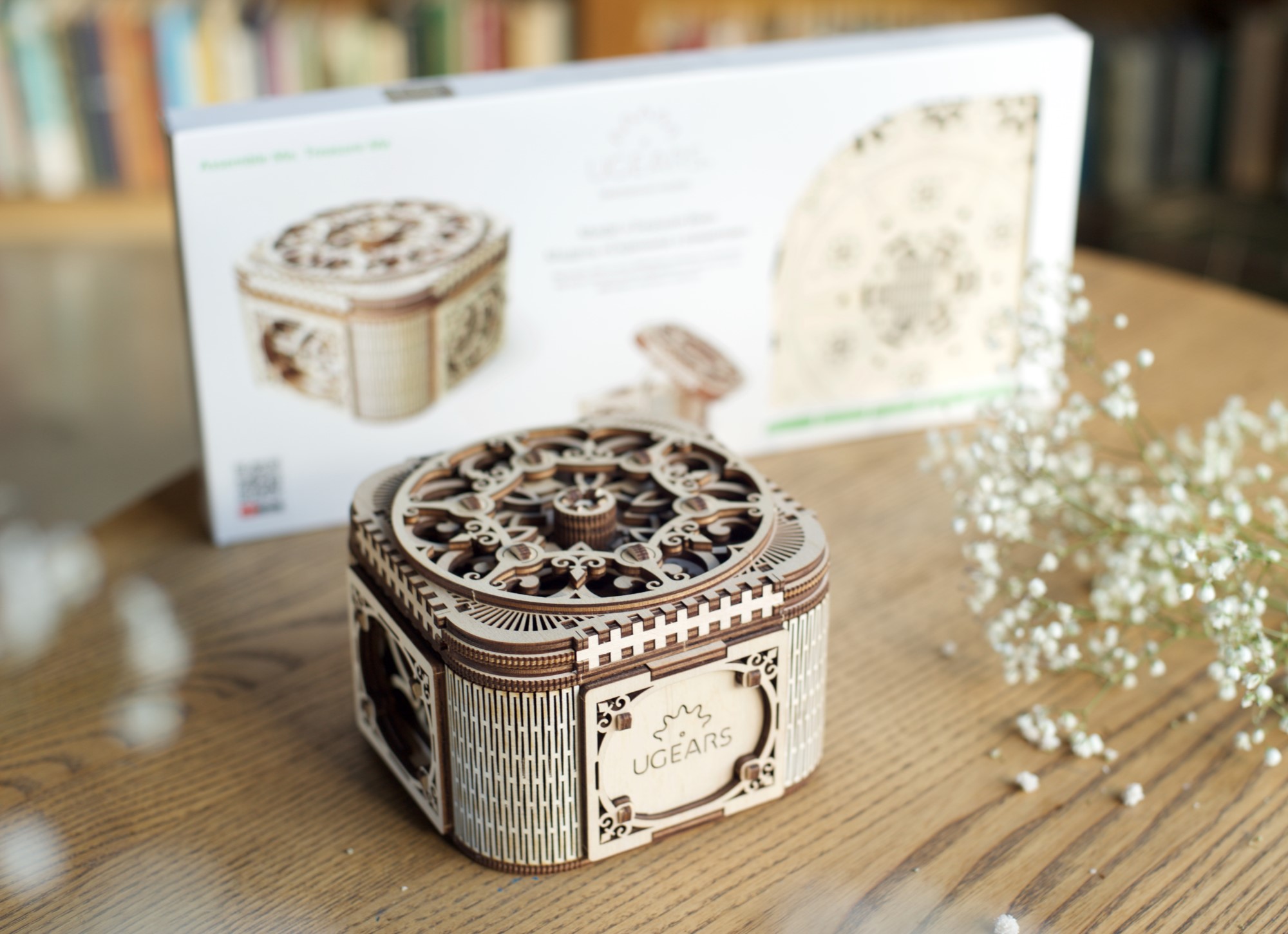