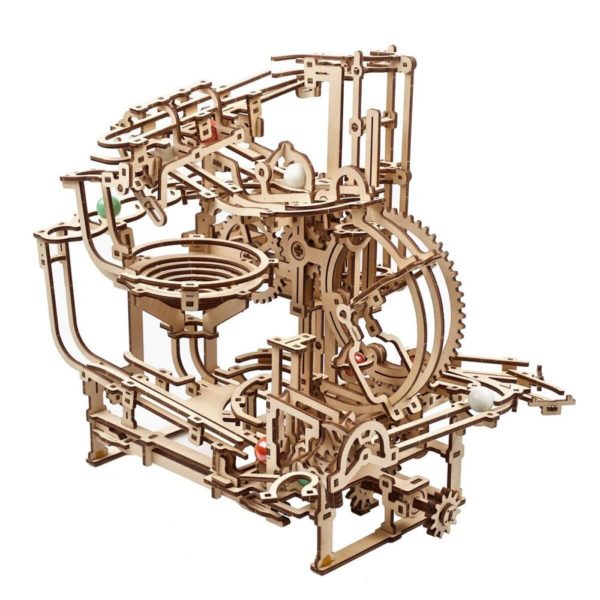 Please welcome the ‘Marble Run Stepped Hoist‘, the 2nd modular marble run of the series . It boasts an intricate three-stepped alternating lift, as well as several new features, which will generate even more fun. Despite being compact, this marble run has a lot to offer. It’s a true example of combining engineering and art. A sculpture? A toy? A labyrinth? All of those and much, much more!

Marble run have taken the world by a storm, with onlookers wondering about the marbles’ every twist and turn. Which marble will win? What will it take for it to do so? The anticipation is sweet and so is victory and delight of ‘your’ marble arriving first. Ugears offers you a chance to become the actual creator of your own intricate marble run, full of delightful surprises!

No glue or special tools are required to assemble this wondrous labyrinth. It is an activity that would bring the whole family together. What’s more, once assembled, you would be able to enjoy the marbles dashing down their course. This model can be used on its own or connected to two or four other Ugears marble run sets.

Do you want to impress your friends with the results of your handiwork? How about relaxing your mind before an important meeting, just looking at those marbles do their thing? Whatever you have in mind for it, this model won’t disappoint!

A three-stage alternating lift sends the marbles back and forth as they travel upwards to begin their exciting journey. A three-marble accumulator is where the third marble to reach the top frees the other two marbles. This is where the unique trajectory of every marble truly begins. The marbles race down one of the thee tracks: the 1st one features a two-marble accumulator and serpentine run; the 2nd is a hammer swing contained in a C-shaped cradle, and the 3rd has a funnel (or whirlpool). Eventually all three get through the collection tray and then into the seesaw lift. Then the marbles are either sent back to the 3-stepped lift (by a rocker switch mechanism), or into an attached marble run set!

Each model from Ugears ‘Marble Run’ series can operate as a standalone, or be connected (laterally or frontally) to other Ugears marble runs (you can connect two or four models, in pairs, with the help of special connectors featured in the set). At the end of the run a rocker mechanism can direct marbles one way or the other (or in both directions – it depends on the weight attached), resulting in marbles returning to the original hoist or embarking on a different run. Adjoining marble runs create an amusingly intricate system of connected parts. A single crank brings the whole system to life.

As you assemble the model, you will learn about the interplay of driven gears and drive gears, as well as the function of counterweights. Set the machine in motion by turning the crank handle clockwise, and get mesmerized at the amazing symphony of the gears at work. The structural rigidity of the system is due to a sturdy base and tightened frame parts. A powerful gear drive powers both the main 3-stepped alternating lift and the auxiliary seesaw lift.

The Ugears box has everything you need, including pre-cut wooden boards, ten marbles, wax and sandpaper. Detailed, illustrated instructions in eleven languages will guide you through the process. The Marble Run Stepped Hoist features 355 pieces. It is rated “Advanced”, and has an 8-hour estimated assembly time. Each Ugears model comes with a several spare parts in case you break something. If a unique piece is damaged or broken, our customer service would be happy to ship a replacement part to you (free of charge)!

Overall Rating
4.3
(3 Reviews)
100% would recommend this product
Rating
5 Stars
1 Reviews
4 Stars
2 Reviews
3 Stars
0 Reviews
2 Stars
0 Reviews
1 Stars
0 Reviews
Overall Experience
Play Experience
4
Level of Difficulty
3
Value for Money
4
Please note that by submitting a helpfulness vote on a review your IP address is collected and stored by our trusted third party service provider for the sole purpose of preventing multiple entries from the same IP address. To see how to control your personal data, please see our Privacy policy.