HOME /Blog /Introducing the UGears Globus: a New look at a familiar object

Introducing the UGears Globus: a New look at a familiar object 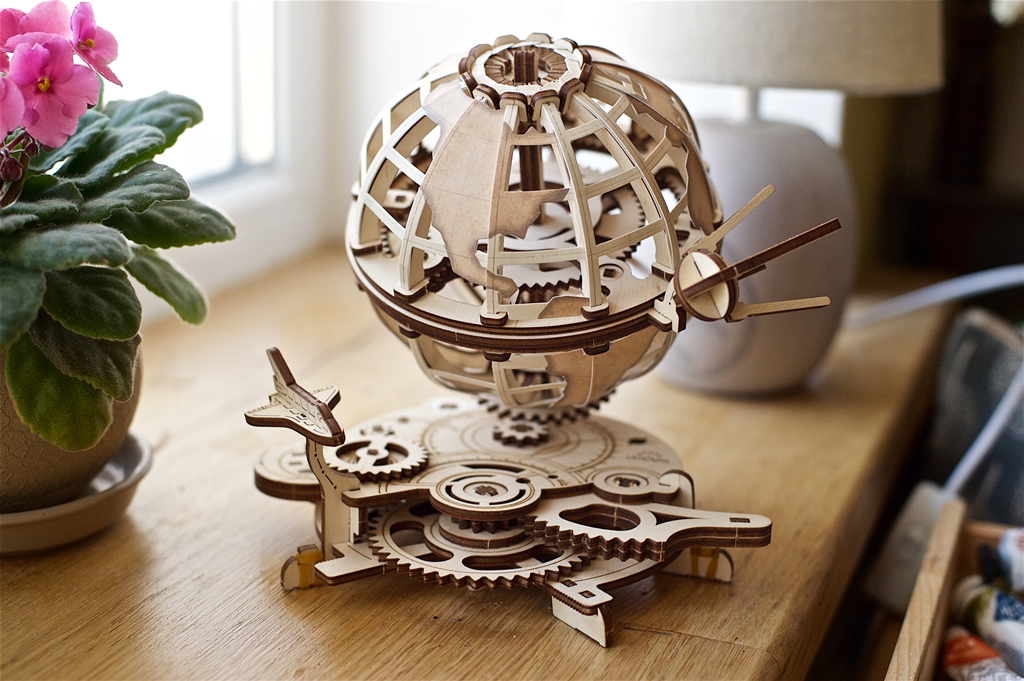 The new UGears Globus set could easily be one of those gifts you give to your friends but are secretly wishing to get as a gift yourself. An intricately-carved exterior, exquisite mechanical detail, and a well-orchestrated mechanism make the Globus one of the most appealing 3d puzzle sets by UGears.

The Globus could become a great gift for a person of any age and with a broad range of interests, as its charm reaches beyond a specific personal preference. And as if that was not enough, the set features some little details that make it more animated that the globes we are all used too. In a word, the UGears take on this familiar object turn it into a curious object that everyone would want to see on their desk.

The first thing that you notice about the Globus once it is assembled is its delicately-carved base. It features numerous gears of different sizes. This is where the mechanism that rotates the Earth sphere around its axis is hidden.

To activate a rubber-band motor, a traditional centerpiece of many UGears sets, simply pull the lever on the base in the clock-wise direction. To fully wind up the Globus pull the lever all the way. After you release the lever, you will be able to watch the gentle spinning if the gears. Additionally, a pendulum reduction mechanism slows down the spin of the Globus. You can also manually spin the Globus if you would like to watch the work of the gears on the base and inside the sphere at an even slower speed.

But this is not all. The Globus offers two extra treats: the two satellites that revolve around the Earth at a different speed. This makes watching the Globus even more exciting as the motion is more complex and features two levels. The two satellites are the Shuttle and the Sputnik. They are attached to the base and you can switch between them whenever you wish.

The UGears Globus: what is in the box?

The UGears Globus comes with a beautifully-illustrated manual in 11 languages. All the parts of the puzzle are pre-cut with a highly-precise laser. You do not need any special tools to either take them out of the wooded boards or to assemble the Globus. Additionally, this model comes with two sets of continents.

The very first thing, however, that you will notice is the unmatched aroma of wood that will fill the room as soon as you open the box. All the UGears sets are made from high-quality plywood and are 100% eco-friendly.

Place the Globus on the desk or in your child’s room and start making plans of all the places you would go to, after the lockdown is over as the Earth will be gently spinning on its axis.