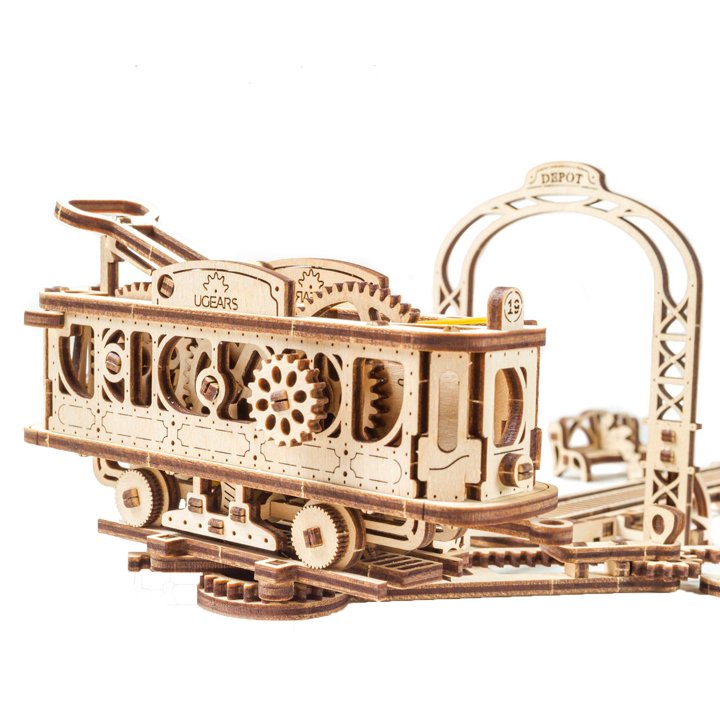 Whether you are new to 3d puzzles or not, you can always find something new and exciting if you look close enough. Wooden 3d puzzles by UGears are known for their unique design and an eco-friendly approach. In addition, UGears offers an abundance of themes to choose from for all ages and, what is even more important, different levels of mechanics knowledge. Each UGears set features moving mechanical parts but with the Mechanical Town series, the company decided to explore the exciting territory of simple-mechanism-based technology even more. And UGears did it in its easily-recognizable style.

The Mechanical Town series features 3d puzzle sets that look like they came from the pages of steampunk fantasy books. When you combine these sets, you will get a tiny city with fully-functional gears and smart mechanisms. Let’s take a look at the most interesting examples in this series.

The Tram Line Model includes a moving Tram Car on a Turntable with an array of tiny little parts that will definitely win over some hearts. For one, this set includes an overhead pantograph for switching to ‘drive’ mode and a knob for opening and closing doors.

Other elements of the set include the following highly-detailed elements:

After assembly, this elegant set can easily turn into decorations of a story. All the characters will be interacting in the scenic surroundings of the historical 19th-century tram stop.

The Robot Factory is another unique UGears set from the Mechanical Town series. It is a quite large set that will occupy a significant amount of space on your table. So get ready to free some space for this stunning and fully-operational robotized production facility.

The main manufacturing block features a Geneva drive. And if it is not a fascination to watch it in action, there are also many well-tailored decorative elements. The famous Stirling steam engine is one of them. The centerpiece of the Robot Factory, however, is the incredibly life-like assembly line. Powered by a wind-up mechanism, it allows you to recreate all the stages of fast-paced mechanical robot production.

Other elements of the set are as follows:

The Tram is a set that looks cute and easy-to-assemble at first glance. But don’t be fooled by its size and elegant exterior. It is a set that will take you between 4 and 8 hours to assemble.  This model was inspired by the very first streetcars and aerial trams.

The Tram on Rails set is ideal for both the first introduction to the Mechanical Town series and also as an additional means of transport for your growing mechanical city.

We will continue introducing you to the exciting Mechanical Town series in the second part of this article.