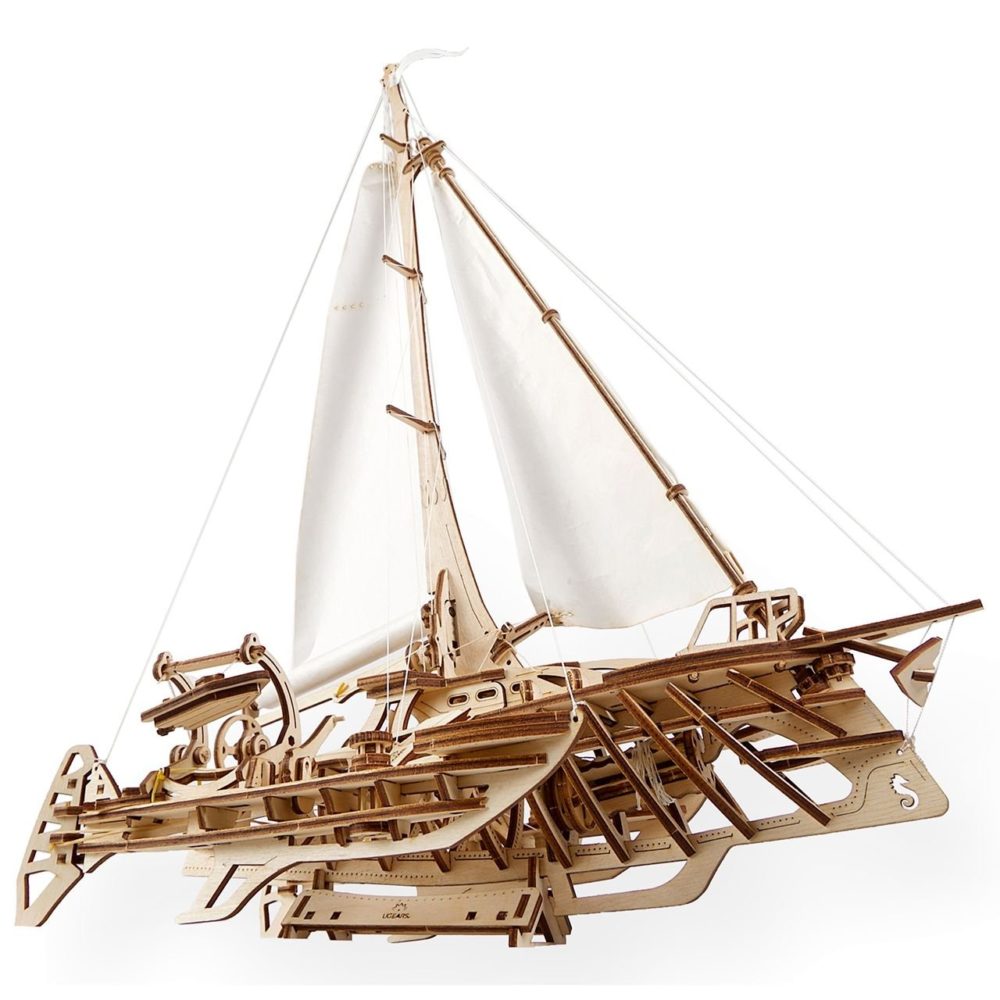 This week we are continuing to add new 3d puzzles to our list of the most challenging UGears sets. If you have missed the first part, you can go back to our previous post.

Puzzles have always been one of the best ways to fight boredom. Surprisingly enough, puzzles sales were among the few others that were not affected by the Great Depression. Instead, they were going up at that time. Which means a puzzle can be our ultimate friend in times of insecurity. Just like now. All mechanical puzzle sets by UGears can be divided into three categories by difficulty level: from ‘Easy’ to ‘Hard’. The ‘Easy’ sets usually take between 20 minutes and 3 hours to assemble. The ‘Medium’ ones take a little bit longer: between 4 and 8 hours. And, at last, the ‘Hard’ assembly level sets will most likely take between 9 and 16 hours of your time!

Today we are talking about the sets in this last category and you should prepare for a bit of challenge. At this point, you might be worried that you or someone you are getting a UGears set for might be confused and give up on it because of its difficulty eventually. But rest assured, this will not happen. All the UGears sets come in a box that includes everything you need for the assembly. This includes a beautifully-illustrated assembly manual in 11 languages and rubber bands in cases when the set is mechanical and can be wound-up. All the puzzle pieces come pre-cut, which means you can gently push them from the wooden boards they arrive in. UGears uses only the highest quality plywood to make their puzzle sets.

The UGears Trimaran Merihobus is a quite intimidating set judging by just the looks of it. A stunning replica of an iconic yacht looks like it is ready to dominate in any regatta. The set consists of 237 parts and features a stunning level of detail. From an automatic anchor-dropping mechanism to the customizable flag, the Merihobus proves to be not in any way less charming and fascinating than the more traditional UGears sets.

Other details that make this set uniquely realistic are the sail booms that are operated with a special lever. This lever that pulls the sheet of the boom.  The mainsail of the Merihobus seats on the mast groove while the staysail can be rolled up. 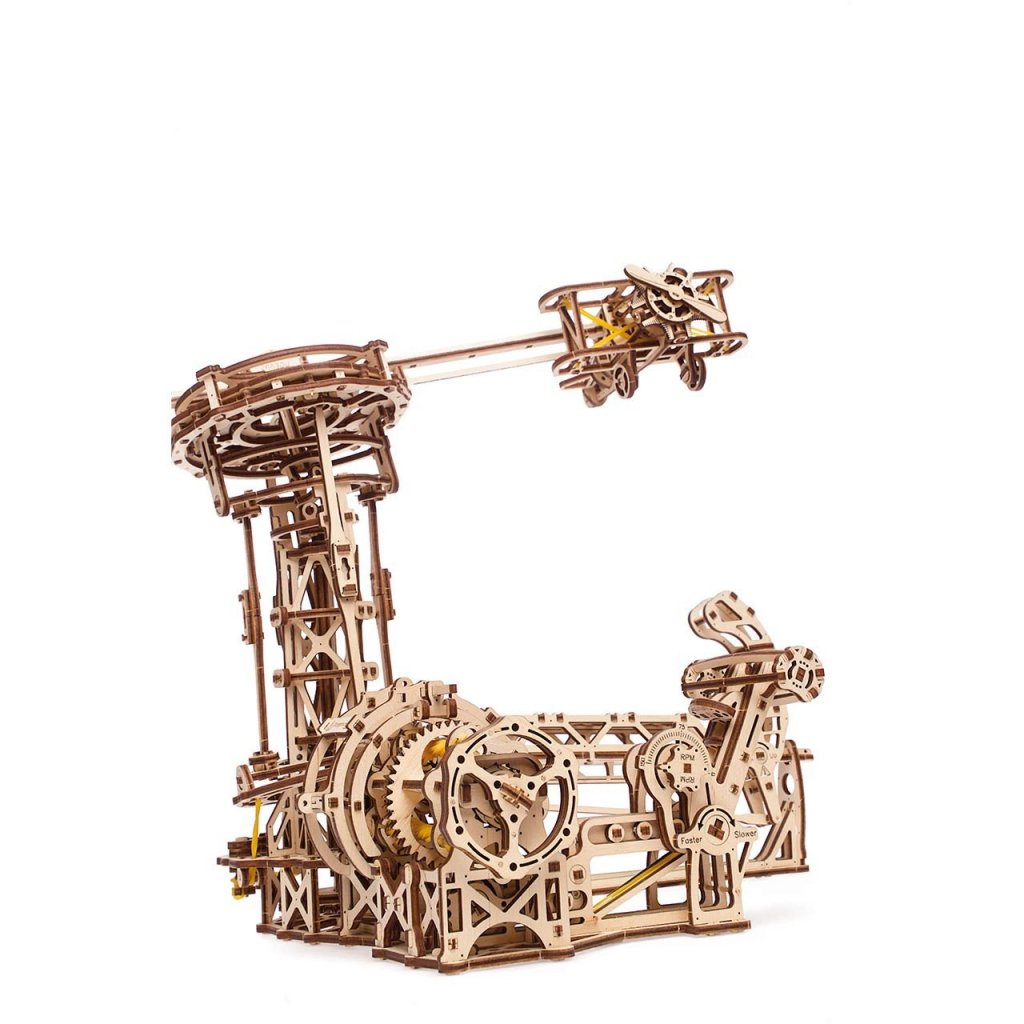 The UGears Aviator is a great set for everyone who is intrigued by the romanticism of the aircraft. This set consists of an astonishing number of parts, 726 which makes it perfect for group assembly.

The Aviator consists of 3 separate modules. The first one, the flight control tower that features a motor and two control bars: the control column, that regulates the roll and pitch, and the motor controller, that adjusts the speed of aircraft. The other two parts are the aircraft, of course. One of them is a helicopter and another one is an airplane. They are completely interchangeable and you can switch between them whenever you feel like it. 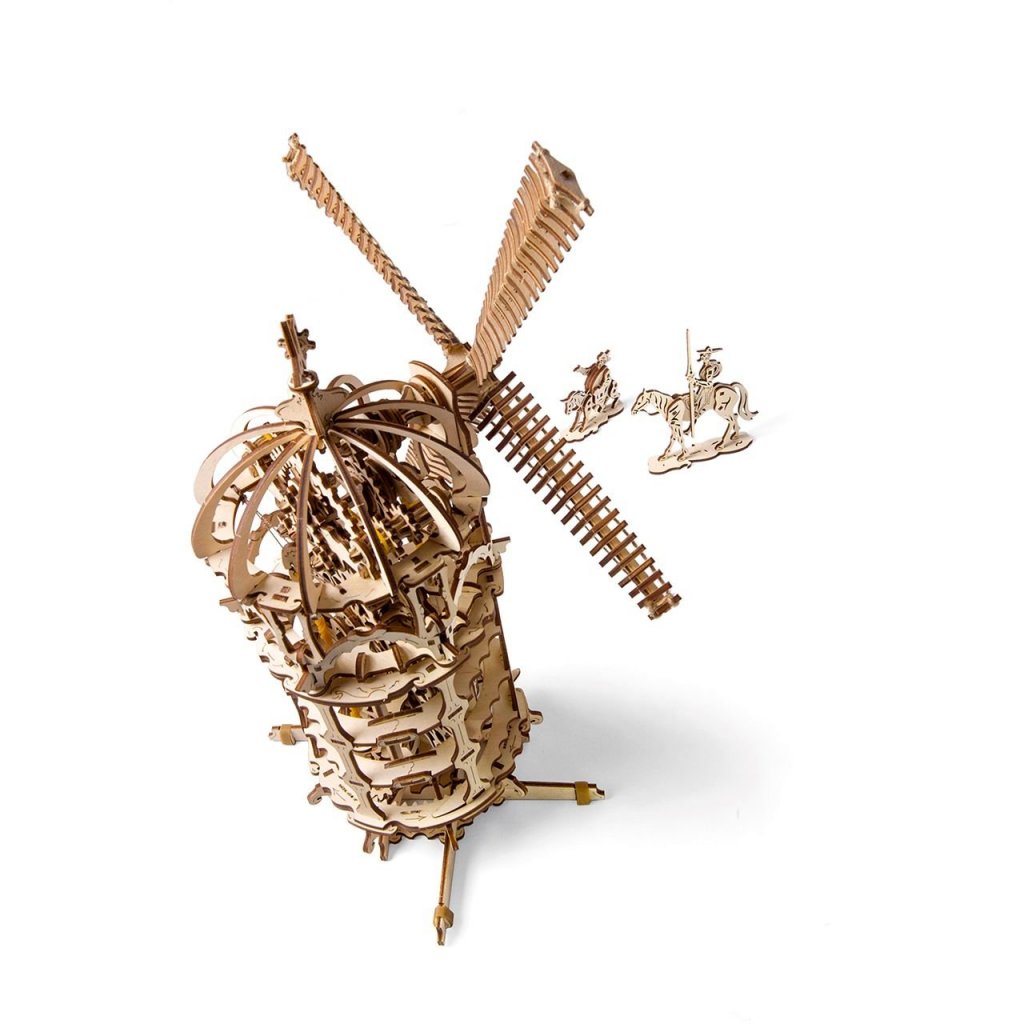 Did you know that a windmill is the world’s oldest mechanical invention? The UGears Tower Windmill pays tribute to the human technological genius as well as to a famous literary masterpiece. Like many other UGears sets, this one was inspired by a particular real-life prototype. The Windmill is a replica of the earliest tower mill in England which retains its working parts and which was restored in 1974.

The Windmill consists of 585 parts and includes tiny character figurines. As you might have guessed, these are the characters from the prominent book by Miguel de Cervantes that is most commonly referred to Don Quixote or of La Mancha or simply Don Quixote. The characters are ready to attack the windmill, which marks the well-known scene in the book that is filled with metaphoric meaning that continues to have a great cultural impact.

Whether you prefer to see this set as a monument to technological progress or as a tribute to one of the most famous scenes of the world literature, the Windmill is a truly charming set and a very exciting one to build.

We hope you enjoyed our selection of the 3d puzzle sets in the ‘Hard’ assembly category and found something that will add more excitement to your free time whether you are by yourself or in a group of friends.