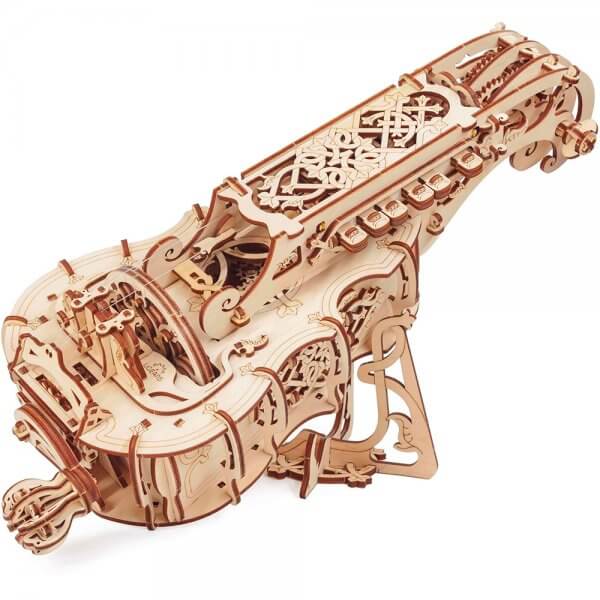 Some of us are lucky to be spending these uncertain times together with our loved ones while others are all on their own.  Of course, being quarantined all by yourself has its upsides and downsides. Everyone is trying their best to learn something new every day. And In order to fight the anxieties and fears of today, many people tend to pick up new hobbies.

For those of you who are looking for a new activity to switch to when your options are limited, we have prepared a list of eco-friendly 3d puzzles. They are ideal for single-person assembly and will help you take your mind off of the troubles humanity is faced with for a few minutes or even hours.

Even if you have never heard of this whimsical and ancient musical instrument itself, you must have most definitely heard the famous song by Donovan, ‘Hurdy Gurdy Man’. Dating back its roots either to Medieval Europe or the Middle East, the Hurdy-Gurdy was a common sight on the streets of the-16th-century France. The poetic name of this instrument matches its unusual appearance and sound. Different sources have compared it to the sound of a violin or a bag-pipe. The wooden Hurdy-Gurdy by UGears bears the noble resemblance to its rich and mysterious history. But it is not just a stylish accessory, it is a fully-functioning musical instrument that requires tuning! It takes between 4 and 8 hours to assemble the pre-cut all-wooden parts of the Hurdy-Gurdy.

The Treasure Box is another elegant example of the finest historic accessories. Treasure chest with secret compartments and tricky latch locks were widely popular during Victorian times. The UGears Treasure Box manages to retain the appearance of its 18th-century predecessors. And at the same time, it is a stylish tabletop accessory that everyone can make with their own hands. Intricate wooden ornaments are covering the box’s exterior while a secret key is hidden on one of its sides. The key launches a special mechanism that lets the box cover elegantly slide to the side to reveal the treasures inside the box.  You can assemble the Treasure Box within 4 to 8 hours.

The Horse Mechanoid is a 3d puzzle that stands out among other UGears sets. The innovative nature of its self-propelled mechanism is accompanied by an elegant exterior. The UGears engineers were inspired by the smooth movements of real-life horses. It might have taken them some time but they created this unique mechanical animal that can move on its own. The Horse features a special claw mechanism that provides for the smooth and steady movement. This is a more challenging set that should take between 9 and 16 hours to assemble on your own.

Whether you are looking for a more complex or an easier set, UGears has you covered. After all, one of the benefits of being in quarantine is an opportunity to make ourselves better. And making a beautiful and eco-friendly wooden figurine is a great start.