HOME /Blog /How to tune a UGears Hurdy-Gurdy

How to tune a UGears Hurdy-Gurdy 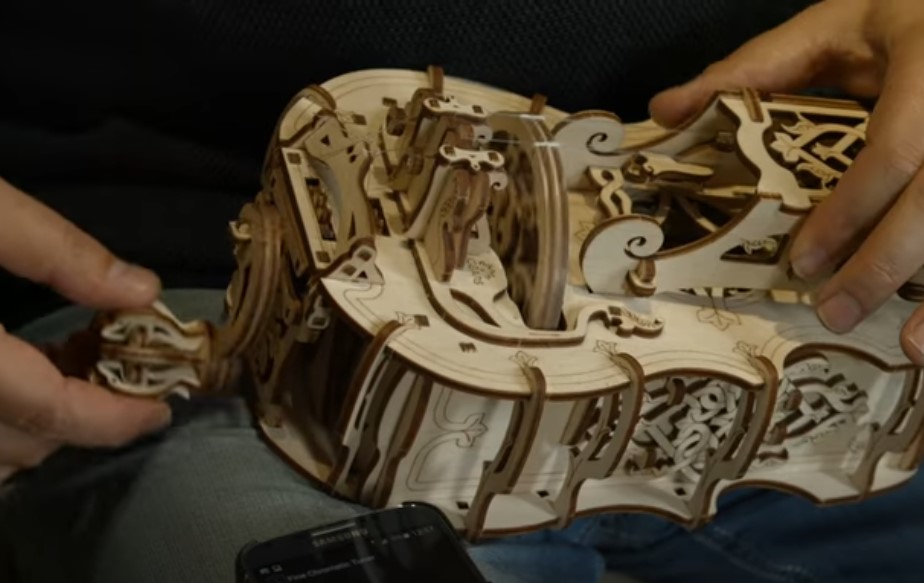 From this article, you will find out how you can build your own fully functional musical instrument, how to tune a UGears hurdy-gurdy and play it like a real musician.

The Hurdy-Gurdy is a musical instrument invented in the 15th century. It produces a bagpipe-like sound occurring from the contact of a handle-turned wheel with the strings. The wheel acts as a fiddle bow on the violin strings – it transfers the vibration to the strings.
The instrument has a long history dating back to the 15th century. Its prototype was an organistrum, a handheld organ that originally emerged in Medieval Europe. Shortly after its initial invention, it underwent a number of changes and became the instrument of choice for a number of touring artists in England. The new round of popularity of hurdy-gurdy occurred in the late 17th and early 18th century when it has grown into the favorite musical instrument of the wealthy.

The idea of Ugears Hurdy-Gurdy

When Ugears team was making research on hurdy-gurdy music, its engineers were fascinated by the craftsmen’s effort and creativity put in the ingenious inlays and carving decoration of the musical instrument. They have stumbled upon the idea that the instrument’s music was “a medieval rock’n’roll”, which is quite amazing. All team members were so enamored with the notion of his wonderful and visually beautiful instrument that everyone decided to make a version of the modern hurdy-gurdy.

And as Ugears company is well-known across the world for producing high-quality puzzle builders that produce motion when assembled, naturally, everybody knew it would be a puzzle, that when assembled would become a functional musical instrument. And now we can proudly say that Ugears have achieved this goal. Now you can make your own hurdy-gurdy without any additional tools and skills and then play your favorite songs on this fascinating instrument! 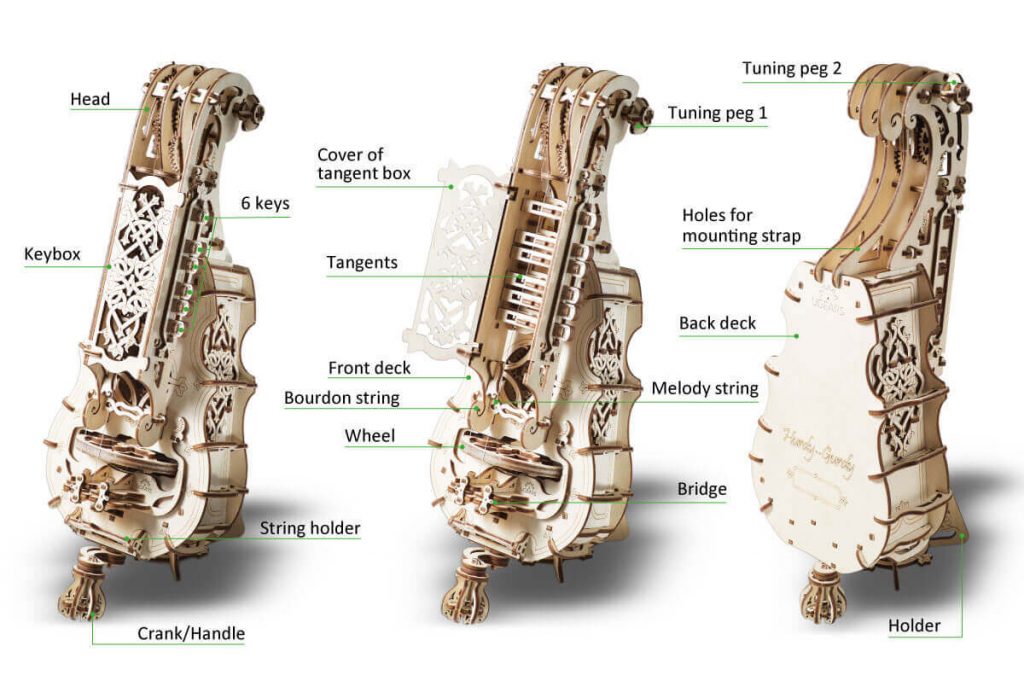 Ugears has constructed a completely working mechanical replica of a 16th-century organistrum that’s been meticulously detailed. The model has a beautiful medieval appearance since it closely resembles the original 16th-century instrument. And with simple and easy-to-follow UGears hurdy-gurdy instructions you can spend several fun hours assembling it on your own or with friends and then discover the instrument’s capabilities with our tutorials.

What notes can UGears Hurdy-Gurdy play?

The model features six keys, each fit to six different notes that are taken by pressing the key and spinning the wheel handle. Besides, one extra note is provided by the freed keys.

How should UGears Hurdy-Gurdy be tuned?

Once you complete assembling your hurdy-gurdy, you can easily tune it using these video tutorials and written instructions.

To get the best result use standard chromatic guitar tuner, that is available online for free. First tune the melody string to D note. The second (bourdon) string has to be tuned  to the same D note, also you can experiment tuning it in octave or other any melodic interval (quint, quart).

At the end wax the wheel with special rosin: it makes the sound better. Little wheels on the bridge will help you to adjust the strings height. If you want to get clearer sound – use a lever in the keybox and switch off the bourdon string.

What is used to sound the strings on a Hurdy-Gurdy?

The music is produced through the handle-rotated wheel touching the strings, and the melodies are performed on a keyboard using keys pressed to modify string pitch.
While learning to play hurdy-gurdy, you may break the strings or feel that they have started to wear out. But do not worry, we have UGears hurdy-gurdy replacement monofilament strings that you can buy separately if you need.

How do you rosin a Hurdy-Gurdy?

It is necessary to rosin the wheel to ensure that it has good friction with the strings for a clean and loud sound. Over time, rosin wears off, so you have to reapply it. Rosin is included in the kit. If you lose it or have used it all and need a new one, you can order it separately.
Instruction on how to rosin the wheel:

You may want to reapply rosin if, over time, it seems that the sound becomes quieter, less clean, or becomes creaky.

If the sound still doesn’t feel right and you wonder why your UGears hurdy-gurdy sound is bad after you have followed the “How to tune a UGears Hurdy-Gurdy” guide, please try the following troubleshooting techniques:

Issue: Quiet or tense sound. This is a sign that the wheel needs to be rosined.
How to solve: Apply additional rosin to the wheel following our instructions. Keep in mind that solid rosin should be smooth and free of sharp edges, or it will create an uneven film that will make the sound worse.

Issue: After rosining the wheel, a string or several strings have a feeble tone. The most likely cause is that the string’s pressure on the wheel is inadequate. This can happen if a string sits too high at the bridge. This can happen since bridges shift in response to temperature and humidity alterations.
How to solve: Check how the strings contact the wheel. You can alter the elevation of the strings like shown in our video on tuning hurdy-gurdy. You can also apply cotton to the strings if you have already lowered the strings but the issue remained. You can follow this tutorial on how to apply cotton to the strings:

Issue: A string has a sharp sound. It happens when the string is pressed too tightly on the wheel. It can happen if you have put too much cotton on the string or the string is set too low.
How to solve: For newcomers, it’s best to tackle both problems at the same time. To do so, follow these steps:
– Take off the cotton and replace it with a new one in a smaller volume.
– Take a look at how much pressure the wheel is rendering on the strings. The proper pressure is when the angle of a string without cotton is scarcely deflected by the wheel. If you observe a considerable bend, shims should be used to elevate the string at the bridge. Add new cotton and then apply a new layer of rosin.

Issue: All strings produce a sharp or scratchy noise. The most prevalent cause is the rosin that has been applied incorrectly. When rosin is applied too forcefully or with a notched block, edges appear on the wheel, and that interferes with the normal wheel rotation.
How to solve: Disconnect the strings, press a clean, lint-free piece of fabric against the wheel with moderate pressure and rotate the wheel several times.

Issue: There is a blank area on the wheel not producing any sound. It can happen if there isn’t insufficient rosin in a certain area of the wheel or if there is oil or other contaminants on the wheel.
How to solve: Apply a new rosin layer to make sure it is spread evenly. If this doesn’t help, press a clean, lint-free piece of fabric tightly against the wheel while rotating it to absorb the contaminants. Then, rosin the wheel again and listen to the result.

Issue: Various pitches on different strings are heard when you touch a key. This means that the keys are not touching the melody strings at the same moment, or one of the keys is twisted.
How to solve: Look at the keys to see why one of them doesn’t touch the string. Make any necessary adjustments to make sure that they contact the strings simultaneously.

How long UGears Hurdy-Gurdy would last?

It greatly depends on how you maintain it. It means you have to rosin the wheel timely, remove contaminations, replace strings (if needed), tune it, and keep it in a dry place with a stable air temperature.

How hard is it to learn the Hurdy-Gurdy?

Hurdy-Gurdy is a simple-to-learn instrument you can even buy for kids. To get the music going, you need to spin the handle with one hand and press the keys with another to alter the pitch of the strings.
You can find multiple tutorials on the Internet, and we have also prepared a whole collection of musical lessons performed by Oleksiy Kabanov, a professional hurdy-gurdy musician. We also have some easy-to-read tablatures for these well-known songs: 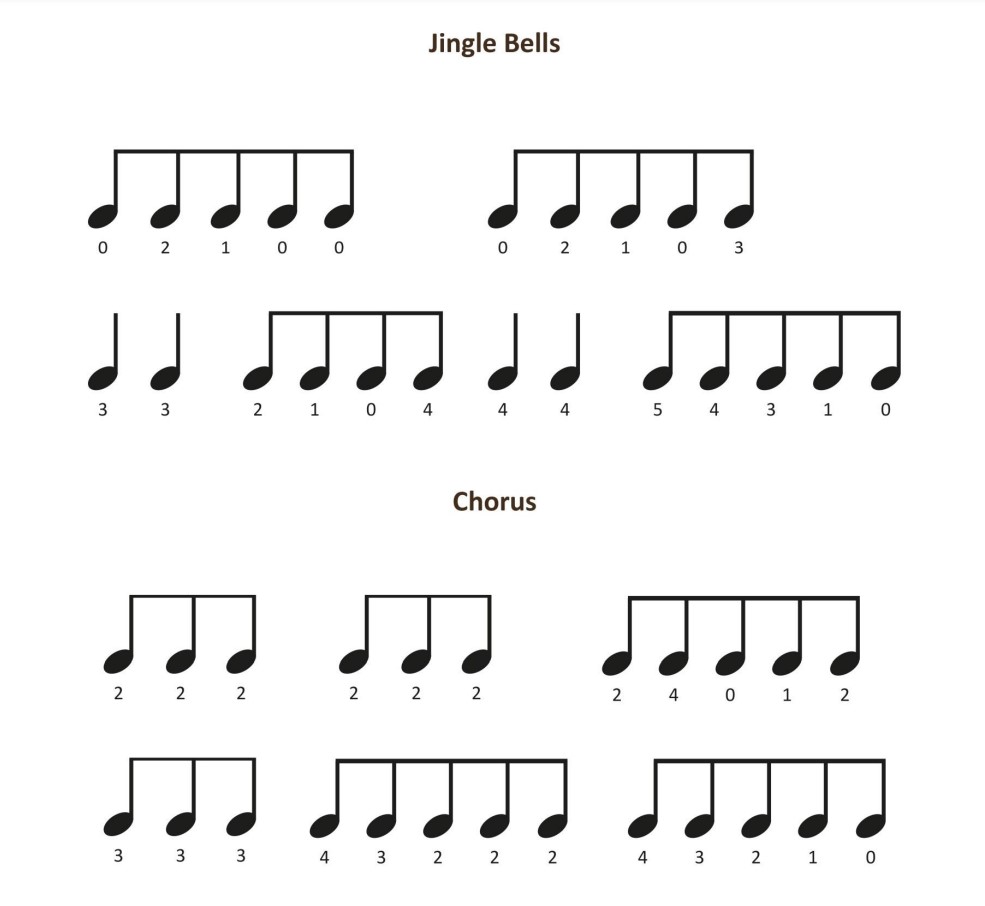 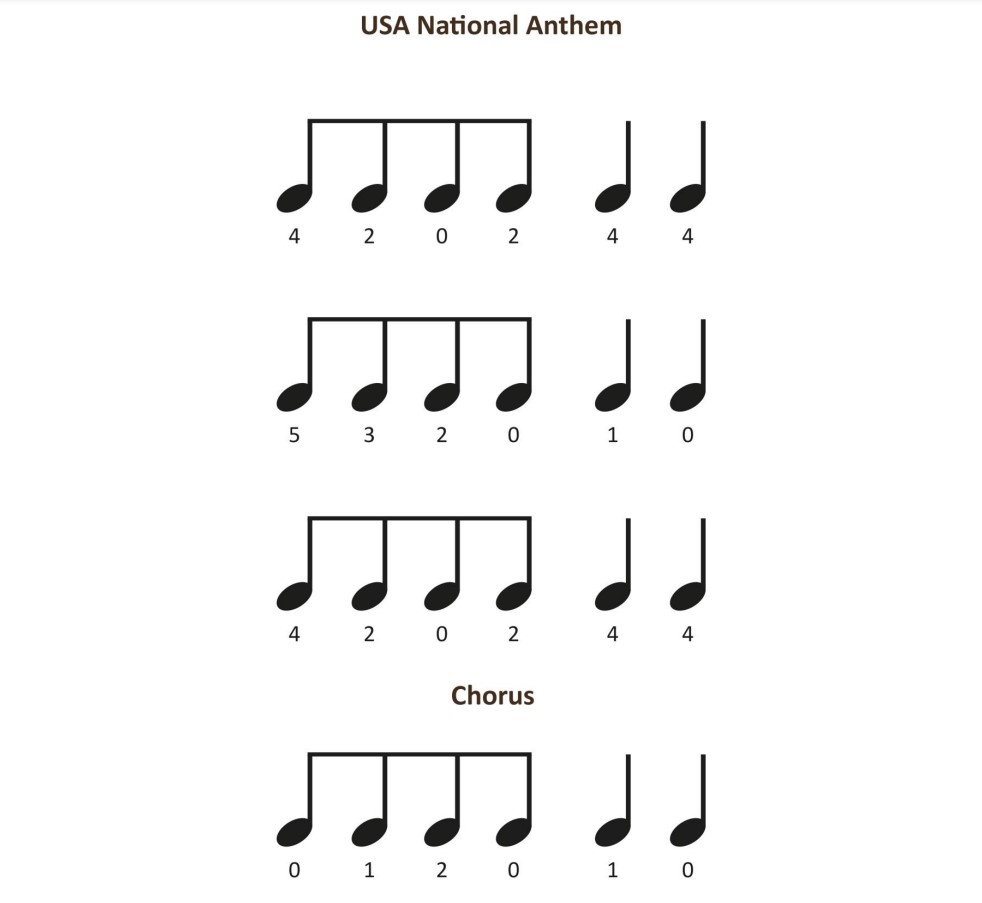