HOME /Blog /UGears Carousel: one of the most exquisite puzzles by UGears

UGears Carousel: one of the most exquisite puzzles by UGears 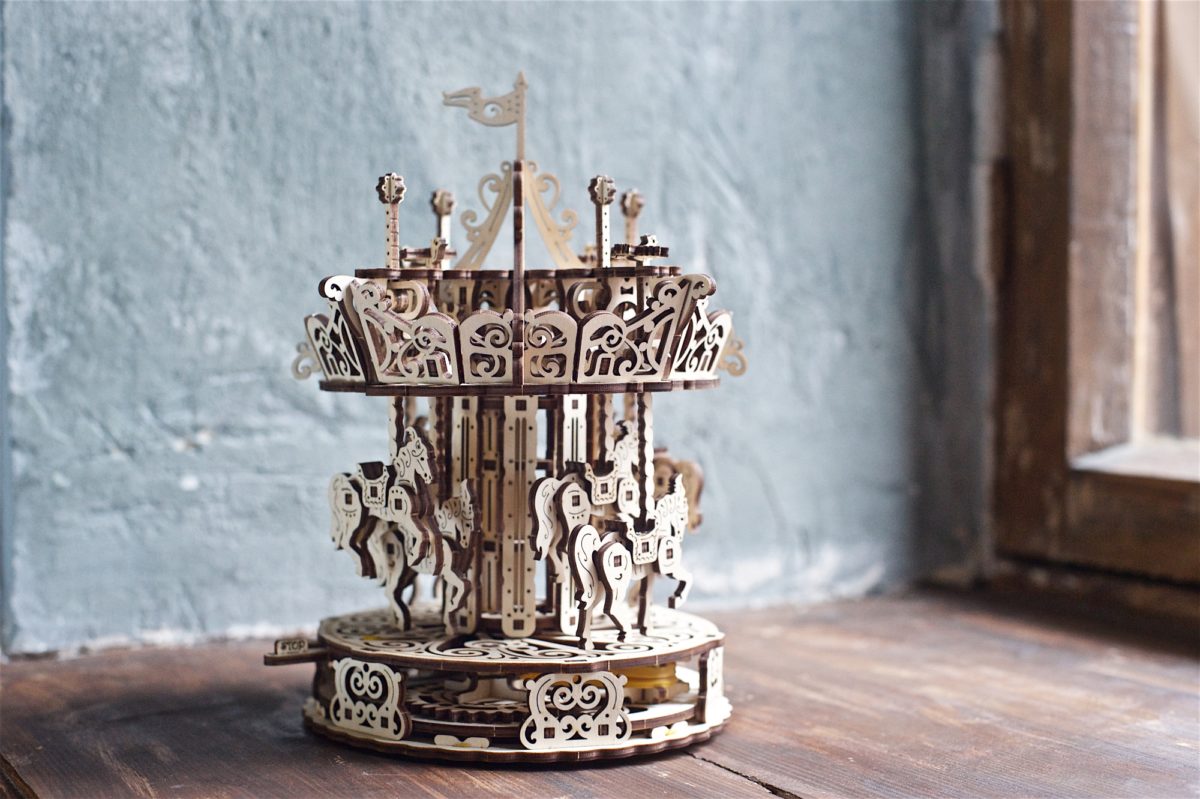 As summer is getting closer and closer, it is high time to see the spring off with the best spring puzzle set UGears has released in a while. The UGears Carousel is a lovely set that will definitely be love at first sight. The unique feature of this model is that it looks stunning both when it is just sitting on your desk and when it is in motion. The Carousel has it everything you would want in a nostalgic set for your mother or a tasteful present to your daughter.

If you had to sum up the experience of assembling the Carousel set, the best way to describe it would be an idiom: ‘Don’t judge a book by its cover’. This seemingly delicate 3d puzzle set, however, takes between 4 and 8 hours to assemble.  But do not worry, the Carousel comes with an illustrated manual in 11 languages. What is more, just like all the other UGears sets, this one is completely eco-friendly. The Carousel is made from high-quality plywood. It does not require the use of any additional tools, such as glue, at any stage of its exciting assembly.

The mechanism behind the UGears Carousel

The two central elements of the Carousel’s design is the pole and the base that each rotate in an opposite direction from each other. When the Carousel is wound up, it seems that both the central pole and the platform are rotating at a faster speed than they actually are. It happens thanks to the opposite-direction rotations that we mentioned. They create this fascinating and life-like motion of the whole construction.

But let’s find out what creates the motion in the first place. If you are familiar with other UGears sets, you might have guessed that the power is created by a wind-up rubber-band motor. The wind-up key that is located at the base of the model, creates tension in the rubber bands. These bands are, in turn, attached to the main axle. Then, the main axle is connected to the central pole. These two are joined together by means of a planetary gear. This is a part that you can find in any modern bicycle and which allows you to switch between speeds. Additionally, the pendulum gear slows down the rotation of the main axle. That makes the Carousel’s movements smoother and more realistic.

As for the decorative elements of this model, the Carousel truly stands out among many other UGears sets. The base features an open design. This allows you to observe the rubber band mechanism as it slowly unwinds. Apart from the central pole, there are additional ones that are called crankshafts. They are set in two rows and move the horses up and down. To ensure the realistic nature of this model, the designers put in two types of horses. The horses move up and down at different times. To add even more fun, there are birds on top of each horse’s crankshaft. Together with the charming exterior ornaments and a waving flag on the top of the Carousel, it creates a stunning sight.