The very first jigsaw puzzles were made out of wood in Europe in the 1760s and initially were just maps cut into little pieces that fit together. This invention that is accredited to John Spilsbury, an engraver and a mapmaker, was aimed at creating an entertaining way for children to study Geography. Jigsaw puzzles have come a long way since then spreading both beyond their initial target audience, with first jigsaw puzzles for adults appearing in the early 20th century and shifting the balance between education and entertainment, with the appearance of, for example, custom jigsaw puzzles with family pictures and other pre-selected images on them.

There is an interesting fact from the history of jigsaw puzzles that sheds some light on their universal entertainment value as well as demonstrates the impact they had and continue having on the way we choose to spend our leisure. In 1933, during the Great Depression, jigsaw puzzles for adults spiked in popularity with 10 million of them being sold per week.

Puzzles are entertaining and educational, they came to our rescue when we needed a cheap and interesting hobby to keep our spirits up and our minds busy, but how can they still retain their appeal in the times of smartphones and the internet?

Wooden puzzles in 3d by UGears are our company’s tribute to the fascinating journey puzzles have taken to make it to our homes today. Our intent was to take the best features of a jigsaw puzzle that helped it stay afloat and popular for so long and add new elements to it to keep the reinvented 3D wooden puzzle not only fun and entertaining but also educational for both children and adults.

Toys started off as an educational venture, and this is a natural process that began as soon as our ancestors realized that a hands-on approach to teaching children about our society and the world around us will be easier to implement through play.

The key advantage of an educational toy is that in the age when technology is changing our lifestyle to the core, the pace of our lives is speeding up, and more and more often we find ourselves jumping from one issue to another because of the constant pressure to filter the unending data flow, we need something to keep our focus on for a bit longer and help our brain to take a break. And if a break for our bodies in most cases means idleness, it couldn’t be further away from the truth for our brain. One of the more recent studies on jigsaw puzzles published on PMC (PubMed Central®, U.S. National Institutes of Health’s National Library of Medicine (NIH/NLM)), 3D Jigsaw Puzzles As Cognitive Enrichment (PACE) shows that puzzles have a significant influence on the developing brain of a child, having a positive impact on an IQ level,  and developing problem-solving skills, as well as a brain of an adult, contributing to a delay in development of Dementia and Alzheimer’s. In addition, time and again puzzles have been found beneficial for reducing stress and improving an overall mood.

What makes UGears puzzle sets educational? Each wooden 3d puzzle features one or multiple moving elements, which work as an illustration of a mechanical principle, be that a Geneva drive, a pendulum, a claw mechanism, and much more. Almost every wooden puzzle is set in motion by a self-propelled rubber-band motor that, in some models, powers the gears that are exposed on the sides of the model, creating a fascinating show and providing an unusual learning experience for all the proud owners of these unique wooden puzzle toys.

More than a wooden puzzle kit

Every 3D wooden puzzle by UGears is made from high-grade 100%-natural plywood. Elegant shapes and whimsical ornaments are all signature elements of each toy, while the fine texture and the magnificent aroma of wood fills the room the moment you open the packaging.

But, most importantly, the fun doesn’t end when a puzzle is complete. Unlike, jigsaw puzzles, wooden 3D models are very compact and can be easily transported from one place to another and even taken outside to the park or on board game night at a friend’s house as a game accessory.

Once assembled, UGears wooden puzzles look stylish and recognizable, so you can easily use them as an element of décor at home or at an office. These elegant sets cover a variety of themes, including transport, buildings, animals, fantasy board games and much more. You might not even notice when they start turning into a huge collection, making it easier for your friends to look for a gift for you each time.

All the moving elements, opening doors, and hoods of cars, rolling up sails, moving levers and pistons, as well as tiny figurines of people can become a part of an exciting story more than once, which will make your child come back to his toy over and over again.

All UGears sets are split into three categories, depending on the assembly difficulty level: from easy to hard. These construction kits for adults could make a great gift for any occasion and almost any preference, as a variety of themes ranges from boats, trains, vintage cars, and heavy machinery to miniature mechanical towns with tiny villagers.

The UGears collection has something for everyone, and we will start our short 3D puzzle sets guide with the real treats for everyone looking for unique home and office decor elements. Marked as ‘Easy’ or ‘Intermediate’ these sets normally take from 1 to 3 or 4 to 8 hours to build.

The UGears Date Navigator set might look complex at a first glance, with its vintage exterior it looks like a Victorian-era navigation device from the Royal Navy vessel. In fact, this exquisite steampunk artifact is a wall calendar that will allow you to navigate dates from 2017 till 2044 by simply turning the wheels with years, months, days of the week and dates.

While the Date Navigator could make a great wall decoration, the UGears Timer is a stylish tabletop accessory with beautiful moving gears and a rotating pendulum the rolls from side to side with a mesmerizing rhythm counting down time from 1 to 20 minutes with a pleasant ticking sound.

UGears Card Holder is a perfect treat for the fans of tabletop RPGs. Looking like a treasure box and not bigger than a fantasy book, this set is in fact a storage for the cards that everyone familiar with the subject of board RPG games not only finds challenging to store securely but also struggles to keep in order during games. This set is a real problem-solver, as it easily transforms into an ergonomic staircase that keeps all the cards securely stored and within easy reach, saving the valuable table space.

The UGears U-9 Grand Prix Car set celebrates the charm of the 20th-century early race cars and the first Grand Prix race car. This fascinating wooden model features a 16-valve V8 engine, link rod and transmission that allows it to switch to ‘reverse’, ‘idle’, and ‘forward’ modes at any time.

All these sets are easy to assemble, which makes them perfects for both people that have only recently been introduced to construction kits for adults and someone who is entirely not familiar with this subject. The stylish UGears sets are guaranteed to produce a wow-effect and inspire them to move on to the more complex 3D puzzles.

The more difficult puzzles for adults by UGears that are marked as ‘Hard’ in terms of assembly are the ones where things get really serious with assembly times ranging from 9 to 16 hours and the number of parts at times being as much as 900 pieces. These sets are equally enjoyable to build both alone and in a group of friends or loved ones.

The UGears V-Express Steam Train with Tender is an astonishingly-detailed tribute to a legendary engineering era. Just like many other mechanical vehicle sets by UGears the side of this train is open which allows for an obstructed view of all its moving gears in all their glory.

The UGears Treasure Box is one of the UGears storage sets. This meticulously-detailed beauty bears resemblance to the Victorian-era secret puzzle boxes with hidden compartments and features a secret key that is stored on its lid that sets off an exquisite opening mechanism that gently slides the lid to the side.

The UGears Hurdy-Gurdy set could become an ideal gift for any musician, as it is a fully-functioning musical instrument that used to be on the peak of its popularity in 17th-century Europe. Sounding like a mix of a violin and a bagpipe and needing some tuning from time to time, this is one of the sets that brings the UGears’ puzzles capacity of extending fun beyond the assembly process to a whole new level.

The UGears unique wooden puzzle toys are, of course, not limited to the adult audience, with many sets, such as the Coloring Models series that is targeted at children that are as young as 5 years old with cuddly cartoonish characters and moving parts that can be painted after assembly. The majority of sets for kids are, however, aimed at older kids that are starting to study Physics at school and are showing interest in engineering and building things with their own hands. Kids puzzles in 3D are made of wood and are centered around such subjects as cars, trains, weapons, and tabletop accessories. They come in ‘Easy’, ‘Intermediate’, and ‘Hard’ levels with the same estimated assembly times as the adult ones.

The UGears Tractor wooden puzzle set has every element all UGears mechanical vehicles have, including a rubber-band all-wheel drive motor that lets this tiny toy to move with a speed of 2 inches per second, and even a transmission switch that makes it possible to switch the Tractor into “Park”, “Drive”, and “Sport” modes.

The UGears Wolf-01 Handgun is a peaceful and stylish accessory for all the detective and spy games that shoots rubber bands. The Handgun features a secret storage handle for ammunition, and even a safety lock to prevent friendly fire.

The UGears Flower is a beautiful jewelry set for girls that, once wound up, opens up to reveal either a ballerina or a magical tree inside to store all the tiny valuables or knick-knacks of the little princess.

The wooden 3D puzzles for middle and high-school children normally have more parts, take longer to assemble, and feature a more sophisticated mechanism that sets them in motion.

The UGears Robot Factory is one of the best examples of the UGears Mechanical Towns series. With numerous tiny character figurines, this set can be easily combined with the other ones from the series to create a unique wooden city with fully-functioning motors, levers, and gears. This set features an assembly line that manufactures wooden mechanical robots and is powered by a wind-up rubber-band mechanism.

The UGears Deck Box is another set from the accessories for the tabletop RPGs series. The mechanism features ledges on the side that slide open the box’s covers on top allowing to secure store game cards inside as well as conveniently carry them around.

The UGears Monowheel is one of the aforementioned mechanical sets that are compact and mobile, making them a perfect companion for relaxing walks outside surrounded by the surprised and interested glances from the passers-by. Powered by a rubber band motor, one of the signature elements in almost every mechanical puzzle set by UGears, the Monowheel provides up to 13 ft. of uninterrupted rolling on any firm surface.

🥳 You can always find time for yourself and you

🏎 Drift Cobra Race Car is our tribute to the le

🌅 The summer has passed its middle… And it is

🐟 The Mechanical Aquarium by Ugears is an origi 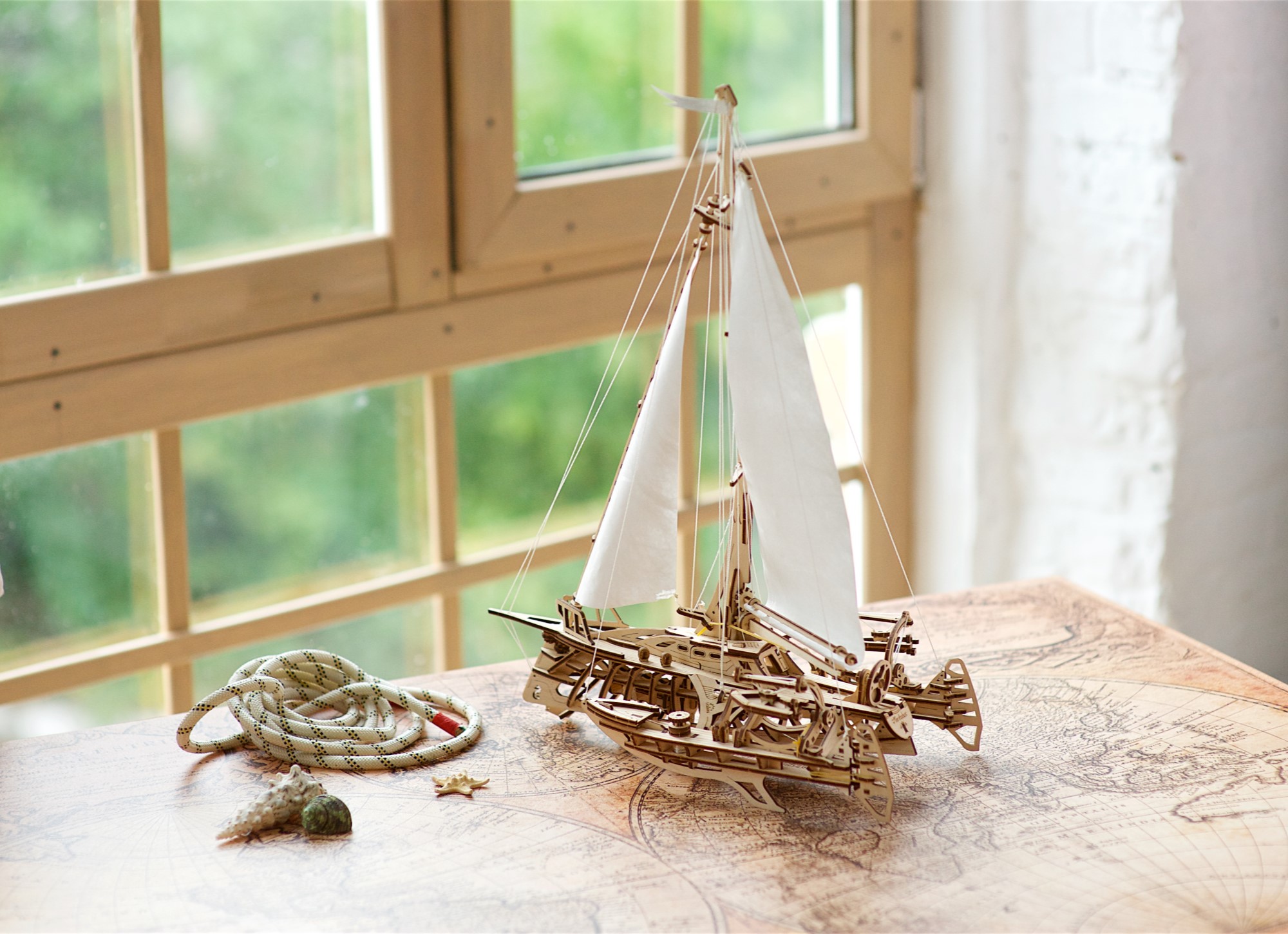